A series of recently published studies found that the fast-moving Omicron variant may be less severe than other Covid strains because of the way it attacks the lungs, media reports say. 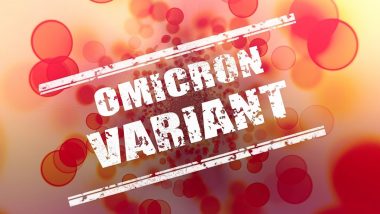 New York, Jan 1: A series of recently published studies found that the fast-moving Omicron variant may be less severe than other Covid strains because of the way it attacks the lungs, media reports say.

According to The New York Times, studies on mice and hamsters have found that Omicron produced less damaging infections to the lungs, and instead was limited largely to the nose, throat, and windpipe.

"It is fair to say that the idea of a disease that manifests itself primarily in the upper respiratory system is emerging," Roland Eils, a computational biologist at the Berlin Institute of Health who has studied how coronaviruses infect the airway was quoted as saying.

One of the studies found that the Omicron levels in the lungs were one-tenth or less of the level of other variants, the report said.

Several experiments published in recent days all pointed to the conclusion that Omicron is milder than Delta and other earlier versions of the virus, in line with real-world data, it added.

The studies were posted online in preprint form, meaning they have yet to be reviewed by other scientists and be published in scientific journals.

Omicron was first identified in South Africa and Botswana in late November. It quickly became the dominant strain in South Africa, causing an explosion of infections with a peak of about 26,000 daily cases recorded by mid-December, according to official statistics.

The variant is currently present in more than 100 countries, according to the World Health Organisation, and affects vaccinated people as well as those who have already had coronavirus.

Many studies suggest Omicron, now the dominant strain in some countries, carries a reduced risk of being admitted to hospital, but the WHO still urged caution.

(The above story first appeared on LatestLY on Jan 01, 2022 12:54 PM IST. For more news and updates on politics, world, sports, entertainment and lifestyle, log on to our website latestly.com).