Prince Harry and Meghan Markle Finalise their Santa Barbara Residence, Will Have Ellen DeGeneres and Oprah Winfrey as their Neighbours 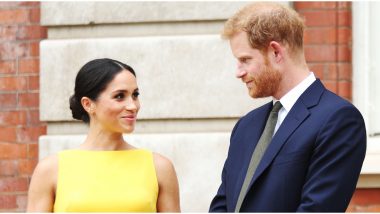 Seems like Prince Harry and Meghan Markle have finally chosen their new abode in the US. The royal couple after their recent exit from the royal family prefered staying at Tyler Perry's mansion in Beverly Hills until they picked their new permanent residence in the country. After juggling and renting mansions in Canada and California, the couple has finally chosen Santa Barbara as their new home address and we couldn't be happier. It’s the first permanent North American residence for the duo and they are looking forward to planning their future in there. Amul Makes a Topical Ad on Prince Harry and Meghan Markle's Exit From Royal Family, Check Out Their Creative Doodle on Megxit!

“The Duke and Duchess of Sussex moved into their family home in July of this year. They have settled into the quiet privacy of their community since their arrival and hope that this will be respected for their neighbours, as well as them for a family,” said a spokesperson in his conversation with Vogue.  Santa Barbara, however, is an hour and a half outside of LA and its peaceful neighbourhood was the major reason that grabbed their attention. The couple will now be neighbours with celebrities like Oprah Winfrey and Ellen DeGeneres who own residences nearby, Baby Archie Turns 1! Meghan Markle Reads to Her Toddler Son on His Birthday in New Adorable Video Filmed by Prince Harry.

This residential investment would be their first as private residents and it means a big deal to them. They are drawing a plan for their new life with son Archie Mountbatten-Windsor and this is just the first step. You can expect more exciting announcements in future, one that may also include Meghan's return to the acting world. Yes, we too are looking forward to it.

(The above story first appeared on LatestLY on Aug 13, 2020 06:00 PM IST. For more news and updates on politics, world, sports, entertainment and lifestyle, log on to our website latestly.com).