Rising Authors, Bodhi JMS Ryder and the Four Lords, Are Set To Reveal the Eien Cosmos, Along With 2 New Novels in July 2022

The world of fantasy novels has become a unique universe in which any author can find itself at the forefront, simply by knowing how and what to write. While this is the case, chance does not necessarily equal execution and many authors lack the ability to capitalize on this era of golden opportunity. This is where Bodhi J.M.S Ryder has managed to make his mark. 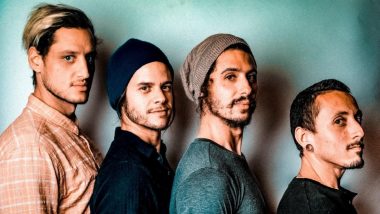 The world of fantasy novels has become a unique universe in which any author can find itself at the forefront, simply by knowing how and what to write. While this is the case, chance does not necessarily equal execution and many authors lack the ability to capitalize on this era of golden opportunity. This is where Bodhi J.M.S Ryder has managed to make his mark.

Bodhi J.M.S Ryder is the acclaimed author of the highly-rated yet emerging underground fantasy/adventure book series titled The Curseborn Saga. This mythical fantasy series was first released as novellas in 2015, and later on as a full blown book series and republished as, No More Heroes: Being the First Part of the Curseborn Saga. Since then, the second book, The Soldier Games: Being the Second Part of the Curseborn Saga, has been released, along with two graphic novel adaptations illustrated by renowned mangaka, Sean Lam (Ringworld, It Takes A Wizard).

In a short span of time, Ryder has managed to establish himself as one of the premier fantasy and adventure novel authors. He and co-creators of the book series have become internationally celebrated bestselling authors, and have won the #1 bestseller on Amazon several times now for new releases. To push the bar further, the original copies of the first five novellas have become somewhat of a rare phenomena amongst fans, and are selling for nearly 1000 dollars per book in the Amazon marketplace!

According to Ryder, “fantasy can be an escape from reality, but also a way of understanding it.” Ryder began working on the book series with his brother, Shanks D. Ryder (AKA Trevor Barber of the band Sweet Tooth) along with his two best friends, Simon Gatsu Sandoval and Pete Snow. He met them while working at a video game store in high school. Recognizing the depreciation in the caliber of storytelling within the industry, the quartet dubbed themselves the Four Lords (4L) and decided that, instead of waiting for someone to make what they wanted so badly to see, they would take up the mantle and do it themselves.

Fast forward 11 years, and they have done book signings all over California, including 4 years in a row at the world renowned San Diego Comic Con, along with Anime Expo Los Angeles, Fan X in Salt Lake City, and Los Angeles Comic-Con.

Imagination is key, at least according to Einstein. While writing the books, Ryder and the 4L were inspired by Japanese storytelling and mythologies from all around the world. Being students of these myths, the 4L and Bodhi Ryder created and wrote the Vala’Eien, or the book of mythology that breathes to life the fabled Eien Cosmos; a fantasy multiverse 11 years in the making, and architected by different stories built upon stories. These include myths, novelettes, short stories, novels, full book series and even poems and hymns going all the way back to the genesis of all things.

While immersing himself in the Eien Cosmos, Ryder’s imagination becomes the universe, and the rest of the world “seems to just fade away”. On the subject of his goals, Ryder shared that “My dream is to write one of the greatest stories ever told. And I will fight with all my heart to succeed. I am not competing with the famous authors of today. Nor do I intend to make a book that is akin to a firework, something that sparks brightly, but then quickly fades and goes dark.” He further added, “what that means is that I aim to write a story that stands the test of time.”

The stories that Ryder has written and continues to write may one day give him the honor of standing alongside Shakespeare and Homer, or, “the true adversaries” in his words. Ryder means to give with all that he is, his best, to what he loves to do more than anything: write and share stories with the beautiful people of the world. Fantasy can often take you somewhere you've never been before, thus its mystical allure. And once you've visited these other worlds, like those who have eaten fairy fruit for the first time, one will often find themselves revisiting them time and time again.

Fantasy can often show you a different world, or a new perspective. Taking that new perspective to heart, Ryder has become the only author in the world who has created an entire fantasy omniverse, and yet offers much of that omniverse to the world, for free, to read and to share, in the form of poems, myths and short stories that further develop the lore of the book series he pens.

Ryder’s background illustrates just how passionate and talented he is. He became a world traveler (IG @theworldadventurer) to write truly great adventure stories, so that he could fully understand what it means to live an adventure. Since then he lived in Japan, rode a bicycle across Spain, ran with the bulls, surfed big waves in Fiji, climbed 700ft cliffs, and even gone so far as to live with the monks in Nepal, where he wrote The Monastery, a novel he dedicated to the people of Tibet, Nepal and India. “The cost of a book is not the same for everyone in the world”, he noted in a recent interview. That's why he has planned to make many of the stories from the Eien Cosmos free and available to read on his website (www.bodhiryder.com).

The Curseborn Saga, is currently the only book series that takes place within the Eien Cosmos that is available for purchase, and is available via eBook or print on Amazon. Currently, two of the predicted five books have been written and released.

He has also shared that he is set to launch a crowdfunding campaign in July 2022 where he hinted at further revealing the Eien Cosmos, along with launching two brand new novels including the highly awaited 3rd book in the Curseborn Saga series: Grahf & the Web of Fate, along with The Monastery, in which he plans to raise money through the sales of The Monastery to help his friends, who are struggling out there in the world. Tashi, a Tibetan girl he met on his travels, cannot currently return to her country and cannot get citizenship outside it.

If you surround yourself with the good and righteous, they can only raise you up. He also plans to help his other friend Susant in Nepal, who is suffering due to the repercussions of Covid. Ryder named the main character of The Monastery novel after him, since during his stay in Nepal they became true friends and have been ever since. Ryder says Susant taught him many things in life, and he would like to return the kindness in any way he can.

Rumors have it that Jon C. Pool will be returning to paint the third Curseborn Saga book cover, as all of Ryder’s book covers are hand painted on full canvas and sold to the highest bidder. The painting will be available exclusively for the crowdfunding campaign, along with The Monastery book cover painting, which is the first book cover of Bodhi Ryder’s not done by the illustrious Jon C. Pool, but another rising artist from Poland, a young woman named Aleksandra Klepacka.

As the fantasy novel world continues to evolve, it is clear that it will require initiative and hard work from those who wish to stay on top. One thing is for sure, however the space changes, it is certain that Bodhi J.M.S Ryder and the Four Lords will be there, leading the charge.