At this point, Sammy had already started to earn some cash through freelance storyboard gigs and editorial illustrations which covered his living costs. Sammy did not spend his earnings on materialistic items, instead, he re-invested his money into mentorships in environment design, matte painting, and character design from some of his favorite artists. 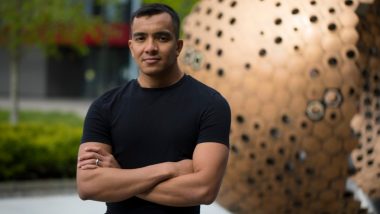 Sammy Khalid is a Concept designer, illustrator, and NFT artist. He completed his Bachelors of Arts in Animation from the University of Dundee. It was in college that he learned that talent is not the only thing needed for success. It is hard work and sheer determination that separates professionals from amateur artists.

Moreover, during his time in university, Sammy learned about the filmmaking process, drawing fundamentals, how to research, and working within a team. It was around this time that he realized he wanted to be a concept artist. Upon graduating, it dawned on Sammy that in order to enter the film industry, his work needed to be as good or better than the current professionals that he admired. Thus, he started to take painting seriously. Moreover, he put a hold on his social life and made an 8-hour daily painting schedule to simulate working in a studio.

At this point, Sammy had already started to earn some cash through freelance storyboard gigs and editorial illustrations which covered his living costs. Sammy did not spend his earnings on materialistic items, instead, he re-invested his money into mentorships in environment design, matte painting, and character design from some of his favorite artists.

They assisted him in building a professional portfolio which helped him get into the film industry by working in a VFX house as a concept artist/matte painter. Since then, Sammy has been working full time as a concept artist and illustrator. In addition to this, he has even gotten the chance to work on projects such as Black Mirror, Artemis Fowl, and League of Legends for dream clients like Disney, Netflix, and HBO. This job has given him amazing flexibility to work from anywhere in the world and garner immense success.

When asked about the habits that have made him successful, Sammy stated that meditation would definitely be on the top of the list. Even early on in his career, he used to meditate daily at the start and at the end of the day which helped him get some peace of mind.

Moreover, Sammy attributes a lot of his success to reading self-help books and eating a healthy diet. He says that he reads a lot of books on the human mindset, productivity, philosophy, psychology, history, and even autobiographies. These books have helped him gain immense knowledge on how to himself, thus resulting in his success. In addition to this, Sammy states that exercising 5 -6 times a week also proves to be of great help. He trains in a variety of different ways which keeps him motivated to improve all aspects of physical fitness.

Moreover, it not only helps him remain fit but also focused on achieving his goals. Lastly, according to Sammy, picking up new hobbies is also one habit that has helped him become successful. Constantly learning new skills has helped him to break through plateaus in his career.

Moreover, his variety of hobbies have led to a lot of cross-pollination of ideas between the different disciplines he likes. Sammy states that in order to become successful you need to have a certain mindset, and anyone can achieve that by first working towards a healthy and positive lifestyle.