International Museum Day 2021: From Smithsonian to The National Museum; Make a Date To Visit These Famous Museums

International Museum Day is celebrated around the world on May 18th to highlight the importance to museums in preserving the culture and heritage from yore for posterity. Let's brush up on our history and immerse ourselves in some culture with a visit to the famous museums. 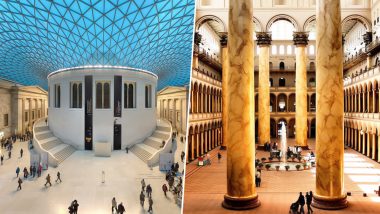 International Museum Day is celebrated around the world on May 18th to highlight the importance to museums in preserving the culture and heritage from yore for posterity. It is celebrated across the World and can last a day or an entire week to raise awareness over museums and their importance in cultural exchange, enrichment of cultures and development of mutual understanding, cooperation and peace among peoples. The first International Museum Day was celebrated 40 years ago in 1977. Since then it has only grown in magnitude with more and more museums participating from across the globe. Last year, more than 37,000 museums participated in the event in about 158 countries and territories. The number clearly indicates that there are thousands of museums spread across the globe. While we can't visit them all, we can visit a few that has gained recognition over the years. So let's brush up on our history and immerse ourselves in some culture with a visit to these famous museums.

Indubitably, one of the best and largest art museums in the world, The Louvre hosts famous artworks ranging from the exquisite works of “Venus de Milo,”  to  Leonardo da Vinci’s “Mona Lisa.” Besides housing 35000 impressive artworks, it also touts archaeological and historical artefacts from across the world.

If you are an avid art enthusiast, this the where you need to be. Guggenheim museum in Newyork collects both modern and contemporary art along with arts from Impressionist, Post-Impressionist era. And you can take a tour without ever leaving your home! Google’s Street View feature lets visitors tour Guggenheim’s famous spiral staircase.

Possibly the oldest and greatest museum in the world, The British Museum was established in 1753, The British Museum touts a remarkable collection that spans over two million years. Rosetta Stone in the Egyptian gallery and Elgin Marble are amongst the most popular exhibits in the museum.

The Smithsonian is the world's largest museum that also moonlights as a research complex.  Established in 1846, it has 19 museums and the National Zoo and looks more like the movie set of Night at the Museum.

In light of the pandemic travelling across international borders seems highly unlikely any time soon. However, India has some famous museums that you can visit.

The National Museum has around 150,000 artefacts that span over five millennia. It is said to be one of the best museums in India and houses historical monuments like the Chola statue of the cosmic dance of Lord Shiva, artefacts from the Indus Valley Civilization, relics of the Buddha from Piprahwa and a great collection of miniature paintings.

While The National Museum is said to be the best, The Indian Museum is the largest and oldest museum in India. Founded by the Asiatic Society of Bengal in Kolkata in 1814,  the Indian Museum has rare collections of antiques, fossils, mummies, and Mughal paintings among others. For the Mummy enthusiasts, The 4,000-year-old Egyptian Mummy and the urn that is said to contain the relics of the Buddha is a sight to behold.

The theme of this year's International Museum Day is “The Future of Museums: Recover and Reimagine,” which serves as a reminder for us all to reinforce the importance of museums in preserving our cultural history.

(The above story first appeared on LatestLY on May 18, 2021 05:19 PM IST. For more news and updates on politics, world, sports, entertainment and lifestyle, log on to our website latestly.com).