Museums are a window to a country’s legendary past, grandeur, culture, and traditions. It is a peek into its scientific, military, or astronomical feet and glories that are worth documenting and cherishing over generations. 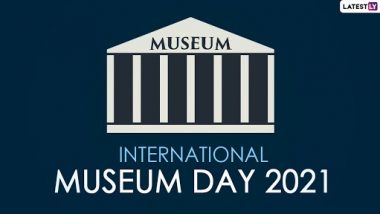 Museums are a window to a country’s legendary past, grandeur, culture, and traditions. It is a peek into its scientific, military, or astronomical feet and glories that are worth documenting and cherishing over generations.

The International Museum Day is celebrated every year with great zeal and zest on 18th May to highlight the imperative role that museums play in documenting History. Museums are unique structures that exist as an aesthetic medium for cultural exchange, enrichment of cultures, and development of mutual understanding, cooperation, and peace among people. International Museum Day 2021: From Smithsonian to The National Museum; Make a Date To Visit These Famous Museums.

The International Museum Day was celebrated for the first time in the year 1977. It has gained significant attention and appreciation world over since then.

As the role of museums in shaping societies and connecting people to their roots got recognized, International Museum Day attracted as many as 20,000 museums to host events in more than 90 countries in the year 2009. And, year by year more and more countries and people became a part of this unique and aesthetic way of cultural and historical exchange.

A host of interactive activities and events are planned throughout the world for the celebration of International Museum Day on 18th May.

On this day, museums around the globe offer a free visit and conduct sessions that add to the knowledge of the visitors while being entertaining and informative.

The outburst of the Covid-19 pandemic has ousted these events and celebrations to go digital. With virtual museum tours taking place and a host of other activities taking place online.

The culture of a nation resides in the hearts and souls of its people.

And to pass it on from one generation to another, museums play an important role.

India is the cradle of the human race, the birthplace of human speech, the mother of history, the grandmother of legend, and the great grandmother of tradition. - Mark Twain

Thus, the legendary history of this glorious land deserves to be documented. And, to no one’s surprise, India has no dearth of national and private museums that have carefully preserved remnants of India’s cultural and historical heritage. Here is a glimpse into some of India’s most iconic museums:

Located at the heart of India, in the national capital, the National Museum is one of the most iconic museums in India. The one of its kind museum houses more than 200,000 artifacts from a period ranging from the pre-historic to the modern age.

To confer this beauty the tag of the ‘crown jewel’ among India’s most illustrious museums would no be a magnification of its glory.

The Indian Museum is India’s oldest and largest museum that was established in the year 1814 under the aegis of the celebrated Danish botanist Dr. Nathaniel Wallich. The museum houses some of the most treasured remnants of India’s history like the Budha’s ashes, human mummy, prehistoric animal skeletons, and the magnificent Ashoka pillar with the four lion emblem, which today is India's national emblem.

These artifacts are preserved in the museum with utmost care and protection and are classified under categories like archaeology, anthropology, art, economic botany, zoology, and geology, etc, spread across 35 illustrious galleries.

Chennai’s Government Museum comes second after the Indian museum in the list of India’s oldest museums. It is spread over a lavish area of 16.25 acres and houses the colossal Museum Theatre, which stages Shakespearean plays regularly.

The museum boasts to house one of India’s most priceless and rare artifacts, as is the heritage of the museum itself. From Raja Ravi Varma's famous paintings to the palm-leaf manuscripts and the largest antique Roman collection outside of Europe are just some of the museum’s major attractions.

In addition, the museum houses one of the city’s most iconic libraries, the Connemara Public Library. Built in the Indo-Gothic style, this iconic structure, also known as the Egmore Museum transcends visitors to a different era and is thus a rare gem in the Indian heritage.

More than thousands of millions of priceless Indian artifacts have been scattered all across the world in prestigious museums plundered mostly from the Indian soil during the Colonial period and some stolen and smuggled later on.

Even as several reports have brought to light the actual origin of these artifacts to be Indian and efforts are being made at all levels to bring these back to their country of origin, still, many of these continue to grace the glory of foreign museums.

Artifacts and deities that have been returned to India:

Many of India’s treasured art pieces and deities have been returned to India from the UK, the USA, and Australia like the 1000 yr old Nataraja deity stolen from the garbha griha of the Brihadeshwara temple, three 15th century idols of Lord Ram, Lakshman, and Sita that were stolen from a temple built in the Vijayanagar period and the Natesha Shiva statue stolen in 1998 from the Ghateshwar temple in Baroli, Rajasthan, among others.

Artifacts that are yet to be returned:

However, there are still many artifacts that are yet to be returned, the infamous Kohinoor diamond being at the top of that list. And, India’s magnificent 17th Century miniature paintings from the Golconda kingdom, the royal charter of the Chola kings, and lakhs of other artifacts are rare antiquities, in display at the Leiden University in the Netherlands.

(The above story first appeared on LatestLY on May 18, 2021 07:41 PM IST. For more news and updates on politics, world, sports, entertainment and lifestyle, log on to our website latestly.com).