Weightlifting Is Not Worth Your Time Says Dr. John Jaquish; Find Out More Below

Dr John Jaquish (DoctorJ.com) has been working on numerous developments in the health and biomedical engineering industry. He and his team at Jaquish Biomedical Corporation have spent years researching and developing superior approaches to health. 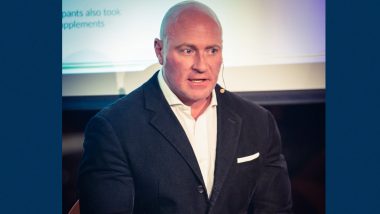 Dr. John Jaquish (DoctorJ.com) has been working on numerous developments in the health and biomedical engineering industry. He and his team at Jaquish Biomedical Corporation have spent years researching and developing superior approaches to health. Jaquish Biomedical Corporation invented a bone density building medical device which is now partnered with Tony Robbins and OsteoStrong for rapid clinic deployment worldwide. The second invention, the X3, a technology that develops muscle much faster than conventional weight lifting, all with the lowest risk of joint injury possible in order to make a better weightlifting experience.

Jaquish Biomedical’s entrepreneurial challenges are unique in that they have been novel but not insurmountable. With the bone density medical device: their first challenge was convincing the medical community that there is a different way from what they are used to. The current bone health market has drugs that are available for prescription, but those have side effects, which can give many osteoporosis patients hesitation.

John states, “We tell every physician the same thing. We say 'wouldn't it be better to try a physical medicine approach first?’ ”.

In other words, an approach where the user triggers the body to fix its own dysfunction as opposed to pharmaceutical medicine. For them, physicians never argue that a non-drug, physical medicine approach wouldn’t be superior, but they want the research.

At first the company didn’t fully understand how little time physicians have, so the team began to summarize research studies and cite statements with clinical references. As soon as they did that, the physicians were excited enough to read all of the literature and then recommend it to their patients.

What drove Dr. Jaquish was his own personal story. His mom suffered from osteoporosis and he wanted nothing more than to help her and the many people like her suffering from the disease every day. He keeps this in the back of his mind as he works on his business day in and day out.

“My mother was diagnosed with osteoporosis, and I wanted to reverse it. Fortunately my first invention (the OsteoStrong medical devices) worked and even overcompensated, giving her the bones of a 30 year old, and at the time she was in her 70s. There is, in my opinion, a lack of science in the physical therapy and fitness world,” Dr. Jaquish explains.

What the Future Holds

Jaquish Biomedical’s next invention, the X3, came with a whole new set of challenges, as this was a fitness/physical therapy product. Science plays well with physicians, but fitness fans, as well as the general public are unable to read complex science, and as we see on social media, typically want their entire knowledge of the human body to fit in some humorous meme.

The Jaquish Biomedical Corporation was making a scientific presentation, showing that they had the key to muscle growth that the world had never seen, and the fitness industry wasn’t listening, so they pivoted. The company began to target busy professionals only as they, as a sub group that was interested in efficiency and safety, both of which the product delivers on. Sales have been smashing ever since. Probably even more profound is that professional athletes picked up on the scientific superiority once 100k units were in circulation, and now many of the biggest names in sports are using X3, with the Miami HEAT even giving John’s book (Weight Lifting is a Waste of Time) an endorsement as seen on the back cover.