When Shah Rukh Khan and Salman Khan came together for Vimal pan masala advertisement, the internet went crazy. And now going the bandwagon is none other than, Salman Khan, who is now the face of Rajshree Elaichi. Check out the full story. 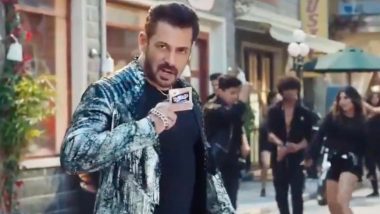 When Shah Rukh Khan and Salman Khan came together for Vimal pan masala advertisement, the internet went crazy. It was always believed that the two superstars are not on good terms with each other, but their collaboration proved the theory wrong. Having said that, after Ajay and SRK's ad, it was reported that Salman Khan is soon to join the Pan Masala bandwagon, and well it did happen. As a video of the Dabangg actor dancing to the tunes of Rajshree Elaichi was finally out, which made his fans all happy. Filmfare Awards 2021 Nominations: Irrfan Khan, Sushant Singh Rajput, Deepika Padukone, Kangana Ranaut Get Nominated - Check Out The Complete List Here.

Not just this, a few Twitterati also started to call SRK, Ajay and Salman's ads as 'Pan Masala Universe'. Also, surprisingly one of the users also reminded that even Akshay Kumar is part of this universe, courtesy Baba Elaichi. Well, we bet more memes featuring the A-list stars promoting pan masala is on the way as we all know that netizens can't keep calm. Salman Khan Is ‘Embarrassed Yet Delighted’ As His Artwork Will Be Displayed at a Prestigious Exhibition.

We wonder why are all top Bollywood stars suddenly so interested in promoting pan masala? Meanwhile, workwise, Salman will be next seen in Radhe: Your Most Wanted Bhai and Tiger 3. Speaking of the Eid release, Radhe, it's been reported that the trailer of the flick will be out in the first week of April. Stay tuned!

(The above story first appeared on LatestLY on Apr 10, 2021 11:20 AM IST. For more news and updates on politics, world, sports, entertainment and lifestyle, log on to our website latestly.com).