Assam: Man Dies of Snakebite While Showing Off His King Cobra Catch in Cachar, Watch Video

A 60-year-old man in Assam died after he was bitten by a King Cobra snake he had caught. The incident took place in Bishnupur village in Cachar district on Wednesday. 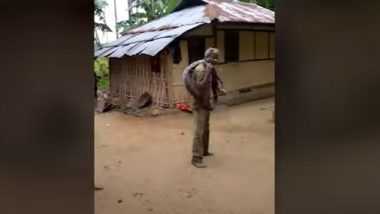 Cachar, October 7: A 60-year-old man in Assam died after he was bitten by a King Cobra snake he had caught. The incident took place in Bishnupur village in Cachar district on Wednesday. The deceased, identified as Raghunandan Bhumij, was reportedly playing with the King Cobra before locals when the snake bit him. A video of Bhumji getting bitten by the snake while playing also surfaced on social media platforms. Assam Reporter's Dramatic Reporting From 'Snake's Mouth' Leaves Netizens In Splits; Watch Viral Video Getting Hilarious Reaction.

Bhumji was working in a paddy field when he spotted a 14-feet-long King Cobra snake. He caught the snake, wrapped it around his neck and started displaying it to villagers, according to local media reports. He was dancing with the King Cobra while holding it inappropriately when it bit him. Locals took him to Silchar Medical College Hospital where doctors declared him brought dead. Murder Via Snake Bite New Trend, Says Supreme Court While Denying Bail to Accused.

The entire incident was recorded in mobile phones of locals. In the video, the King Cobra is seen wrapped around Bhumji's neck. He seen playing playing with the snake and showing it to locals.

After the forest department learned about the incident, officials reached the village. They rescued the snake and released it in the forest. It remained unclear if the snake bit some other person before it was rescued by forest officials. More details were awaited.

(The above story first appeared on LatestLY on Oct 07, 2021 02:30 PM IST. For more news and updates on politics, world, sports, entertainment and lifestyle, log on to our website latestly.com).