The groom's father and bride's mother happened to rekindle their old school romance and apparently have eloped with each other! The young couple was set to marry in the second week of February but the 48-year-old man and the 46-year-old woman have gone missing since 10 days now. 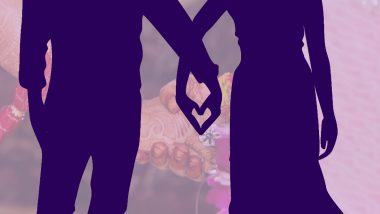 Surat, January 21: In a bizarre twist of events, a young couple from Surat who was set to marry had to call off their marriage, after the groom's father and bride's mother eloped following the rekindling of their romance. The 'rarest of the rare' incidents has taken everyone by surprise. The young couple was set to marry in the second week of February but the 48-year-old father of the groom and the 46-year-old bride's mother have gone missing for 10 days now.

According to a report in TOI , the bride and groom were preparing for their big day since a year now. They were engaged since a year but now the sudden elopement of their respective parents have left everyone shocked. The groom's father Ramesh (name changed) supposedly left his house from Katargram and then the bride's mother Sarita (name changed) left from Navsari. It is reported that the families were neighbours and were good friends. Ramesh and Sarita knew each other since they were young. Bride Calls Off Wedding After Groom Arrives Drunk in Dry State Bihar.

One of the relatives told the same report, "They knew each other since they lived in same society. Some of their close friends informed us after they eloped that they had a relationship in the past too." Sarita's current husband is a diamond artisan. Ramesh works as a textile businessman and has deals in property. The two have gone missing since January 10 and ever since their photos are being shared on social media, their elopement has become a talk of the town. However, now it doesn't restrict there.

There have been several cases where marriages have been called off. Being drunk and creating a scene has been a reason that we have commonly read off for marriages being called off right before the ceremony. In Uttar Pradesh, a bride called off her marriage after the groom under the influence of alcohol broke into a 'Nagin dance'. But this scenario of a twist in tale surpasses them all.

(The above story first appeared on LatestLY on Jan 21, 2020 11:04 AM IST. For more news and updates on politics, world, sports, entertainment and lifestyle, log on to our website latestly.com).