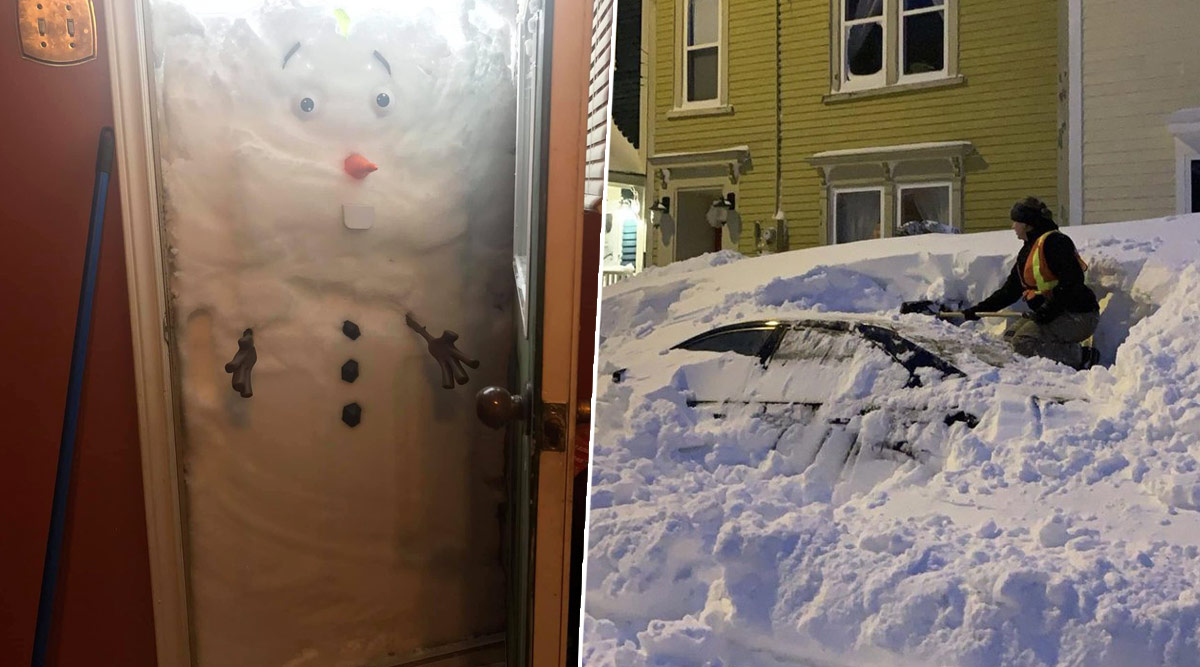 Parts of Newfoundland are buried in feet of snow from a crippling ‘bomb’ blizzard. The situation is so dire that a state of emergency was declared in St. John’s, which banned all but emergency travel and also ordered businesses to close in Newfoundland and Labrador. The epic snow and wind gusts reportedly up to 97 mph whipped snow into massive drifts that buried vehicles, blocked roads, garages and doors of homes and filling the backyards. People describe it as a significant struggle to remove the record-breaking snowdrifts. They have taken to Twitter sharing pictures and videos of the snow and how they are shovelling to get their vehicles. Iceberg Beer: This Beverage From Newfoundland is Made With Water Harvested From Melted Glaciers.

Newfoundland continues to struggle to remove record-breaking snowdrifts and searchers are also on for a missing man following the blizzard. A resident described in media reports that the snow piled is “up to your neck,” in some areas. The entire Canadian province is covered in snow. Social media showed people had begun to literally dig out of their homes, after snowdrifts blocked their doorways. The cleaning up has only started, and the videos show, it is going to be a task for them to remove the snow. Some shared that after nearly 2 to 3 hours of shovelling, they could see the headlight of their car. Again some of them are stuck inside their house as the snow has blocked the doors. Giant 'Iceberg Alley' Floats Through Canada's Newfoundland Coast.

After two hours of shoveling I have finally made it to my car! #yyt#nlweather #stormageddon2020 pic.twitter.com/OfR6YqOjzi

#nlblizzard2020 is so bad even Olaf is trying to get in the house @natashafatah pic.twitter.com/ygYDEwJFij

I think it counts as archeology at this point. #nlwx pic.twitter.com/aevcVs9siw

Here's my STORM DOOR, reason why we can't get out. I was out every 30 minutes last night, then I fell asleep. Now its blocked. pic.twitter.com/UqeSNJMVSO

Welcome to the Snow World!

The snowstorm also created a small avalanche in the Outer Batter of St. John’s, punched through the kitchen and living room of one home, prompting the brief evacuation of a few houses.

BREAKING: This avalanche happened in living room of a house in Outer Battery of St. John’s tonight. It’s in that lovely part of the city that flanks the harbour, the one you see in the tourism ads. @CityofStJohns is evacuating the area. @cbcnl @CBCAlerts @CBCNews #nlblizzard2020 pic.twitter.com/UZqnF6a5YG

Canada’s Prime Minister, Justin Trudeau, offered federal help to the city and province. Atlantic Canada is not unknown to intense storms. However, the extremity of the recent snowfall in such a short period of time, coupled with the ferocity of winds, made this a storm that residents won’t soon forget.