A man has blamed his cat for his wife getting pregnant. He said the couple welcomed their first child, a boy last year. While the couple wanted a second child, they decided to hold on due to the current pandemic. However, his wife fell pregnant despite using a condom. The couple then found out that their cat Tom had poked holes in their condoms. 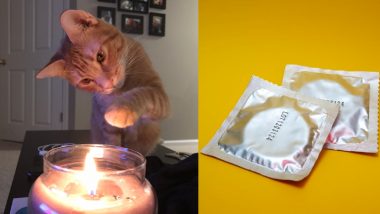 A man has blamed his cat for his wife getting pregnant. He said the couple welcomed their first child, a boy last year. But it was a stressful pregnancy due to different complications include premature birth and preeclampsia. While the couple wanted a second child, they decided to hold on due to the current pandemic. However, his wife fell pregnant despite using condoms. The couple have come to the conclusion that it's because of their 'evil genius' cat Tom, who poked holes in condoms before they used it. Chinese Woman Inserts Spring in Her Vagina as Birth Control Measure, Gets Pregnant With Fourth Child!

Playtonic1 wrote on Reddit, It’s so bad that for weeks after adopting him I thought there was a poltergeist in the house because each morning I’d wake up to find every single cabinet door in the kitchen wide open! My first f*** up was storing the condoms in the same drawer as the Q-tips, which he loves to get into and shred apart." He added, "He must have seen the box of Q-tips in the drawer when I put my rubbers away, because not even an hour later I stumbled upon a horrific scene of chewed plastic straws, shredded cotton fluff and shiny gold condom wrappers scattered around the gapping drawer that once contained them." Can You Get Pregnant With a Second Baby While You Are Already Expecting One? Everything You Need to Know About Superfetation or Double Pregnancy.

After this incident, the man cleaned everything and destroyed Q-tips and for the condoms, he just put them back into the box without checking. He said that he went on to use the condoms "thinking nothing of what happened earlier". But three weeks later his wife started showing pregnancy symptoms and her results came positive. The couple was confused about how it happens while using protection. And that was when he remembered that their ginger cat had messed up with the contents of the drawer.

The man further writes, "I ran over to the bathroom drawer where I kept the condoms, dumped out the box on the counter and started to inspect each miserable little foil square. Sure enough, several had noticeable scratches, teeth marks, and even full-blown punctures in them..." The Reddit post has now gone viral with people posting funny comments on it. While the couple is now ready to welcome their second child, netizens can't get over how the pregnancy happened in the first place.

(The above story first appeared on LatestLY on Jul 20, 2020 12:36 PM IST. For more news and updates on politics, world, sports, entertainment and lifestyle, log on to our website latestly.com).