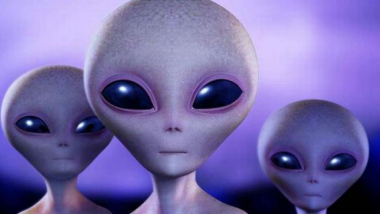 Guess what is China upto now? While the world is jeopardised with the coronavirus pandemic, China will look for, well, aliens. Yes, China has decided that it will start searching for aliens with the help of a giant telescope. Scientists of Extraterrestrial Intelligence (SETI) have started preparations to use the Five Hundred Meter Aperture Spherical Telescope (FAST) to find aliens in space. Officially, from September this year, Chinese scientists will start searching for aliens. Aliens To Contact in the Next 15 Years? Watch the Video of 7 Recent UFO Sightings.

With the help of this magnificent telescope, the construction of which had begun in the year 2011 itself and completed in 2016, China hopes to find aliens. In January 2020 the telescope was analysed and the scientists of SETI published a report in the month of March. Scientists have been working on dealing with obstacles caused by radio frequencies so that the signals of aliens coming to Earth from space can be found.

Scientists in China claim that they will be able to establish communication with aliens using the telescope FAST by filtering all the waves coming towards the earth. Zhang Tongji, the Senior Scientist of China's SETI Project, said that the mission to find aliens and searching for extraterrestrial life will start in September 2020. Do Aliens Really Exist? Some Astronauts Believe in Extraterrestrial Life!

The research aims at improving the telescope’s ability to remove radio frequency interference from Earth and identifying “interesting narrowband candidate ET signals” from aliens. According to Science and Technology Daily in a March speech, Zhang had said it will further examine to see which of these signals could be from aliens.

(The above story first appeared on LatestLY on Jun 01, 2020 07:07 PM IST. For more news and updates on politics, world, sports, entertainment and lifestyle, log on to our website latestly.com).