Do Aliens Really Exist? Some Astronauts Believe in Extraterrestrial Life!

Astronaut Jeff Hoffman accepted his belief in the existence of alien life elsewhere in the universe. 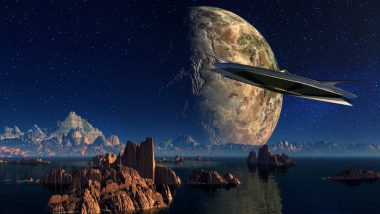 The existence of alien life has been one of the most discussed topics in the scientific world for a long time. While time and again there have been talks about the existence of extraterrestrial life following UFO sightings, proofs to substantiate talks have never come forward. With governments of countries investing large sums of money and manpower in alien probings, the existence an alleged intelligent life has always been a questionable subject.

In a recent interview, National Aeronautics and Space Administration (NASA) Astronaut Jeff Hoffman accepted his belief in the existence of alien life elsewhere in the universe.

In the past, there have been various reports of humans who claimed to met alines. Talking about which, Jeffman said, "Fewer than 600 of the nearly 108 billion people who've existed on this planet have seen it from orbit. That rare experience, along with their advanced science degrees, makes astronauts seem uniquely qualified to answer the question: Are we alone in the universe?"

The talks happened at an event ahead of the debut of the series One Strange Rock on Monday on National Geographic. Filmmaker Darren Aronofsky was also present at the conference. The show will not be just a walk with nature, it compares intimate pictures from Earth with shots from the International Space Station. Mashable quoted Aronofsky as saying, "You take a look at all these systems … as well as it’s outstanding all the important things that need to integrate making this grand truth take place."

Mae Jemison, the first African-American woman in space, stated, "We have to think through things to find the evidence."

Meanwhile, Hoffman believes there is life out there. He said, "But as a scientist, I look for evidence. And as yet, we have no evidence. So I have nothing to support my belief. But I still believe it."

Canadian astronaut Chris Hadfield who has spent 4,000 hours in the space said, "If we can find one fossil on Mars, or one little tube worm deep under the oceans of Europa or Enceladus, then the universe is full of life." The Kepler Space Telescope has discovered 2,342 "confirmed" exoplanets, 30 of which are "less than twice Earth-size in the habitable zone." He added, "That's not even a drop in the bucket. That's a fraction of an atom of a drop in a bucket that's massive beyond comprehension."

In 2010, late cosmologist and physicist Stephen Hawking had said that intelligent aliens may be roaming the cosmos in search of resources to plunder and planets to conquer and colonize." In the documentary, referring to a potentially habitable alien world known as Gliese 832c, he said, "One day, we might receive a signal from a planet like this."

(The above story first appeared on LatestLY on Mar 25, 2018 10:54 AM IST. For more news and updates on politics, world, sports, entertainment and lifestyle, log on to our website latestly.com).