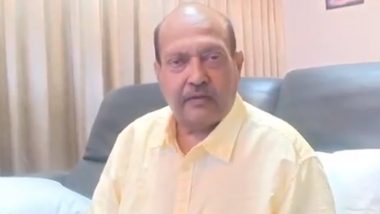 New Delhi, March 3: Amar Singh, former Samajwadi Party (SP) leader on Monday dismissed ‘rumours of his death’ and shared a video saying he is alive and in good spirits. Shah took to micro-blogging site Twitter and shared a video of him saying that he will be fine soon and shall return healthy at the earliest as possible. Rumours of Singh's death were doing rounds on social media, but the fact is, the news of his death is false. Singh has been undergoing treatment at a hospital in Singapore after being diagnosed with kidney ailment few years ago.

In the video which was captioned as 'Tiger Zinda Hai', the former SP leader said he is speaking from Singapore.  Singh said, "Himmat baki hain, josh baaki hain. Hosh bhi baaki hain. Hamare dost ye keh rahein hain ki Yamraj ne hamein apne paas bula liya hain. Aisa Kuchh nahi hain.. (Few of my friends and wellwishers, have been saying that I am dead. But that is not the case)," Singh said.

Singh said after his surgery, he will return as soon as possible and be with everyone. "I will continue to live the way I have lived so far... Once I had fallen from a plane, fought death for 13 days in the middle east. The doctor says my brain is like that of a 10-year-old," Singh added.

Today is my father’s death anniversary & I got a message for the same from @SrBachchan ji. At this stage of life when I am fighting a battle of life & death I regret for my over reaction against Amit ji & family. God bless them all.

In the same video, Singh expressed ‘regret’ for his behaviour towards Bollywood actor Amitabh Bachchan and his family. He said he regrets his  overreaction against the Bachchan family and urged them to end their feud.

Amar Singh is Alive and Undergoing Treatment in Singapore

(The above story first appeared on LatestLY on Mar 03, 2020 09:09 AM IST. For more news and updates on politics, world, sports, entertainment and lifestyle, log on to our website latestly.com).