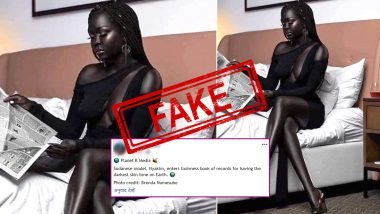 Not everything that you see on the internet is true, but not everyone doesn't realise that which starts churning up fake news. In the pandemic of coronavirus, we have seen numerous fake stories turning up online. Now a picture of a Sudanese model named Nyakim Gatwech is going viral with a claim that she has entered the Guinness World Records for having the darkest skin on Earth. However, there is no truth to this claim, it is a fake piece of news. Guinness World Records do not have a category that is based on skin tones. Viral Story of the Old Woman in the Mumbai Local Being an Ex-Hockey Player and Model Is FAKE!

Nyakim Gatwech is a model that's true, she has a dark skin tone that is also true and it has made her famous significantly on social media. However, it has not made her part of any Guinness World Record as there's no such category. A Facebook page called Planet B Media has shared a photo of Nyakim Gatwech from one of her photoshoots and the caption reads, "Sudanese model, Nyakim, enters Guinness book of records for having the darkest skin tone on Earth." The claim is false. TikTok’s #VogueChallenge Is Breaking Norms With Black People Gracing the Cover of Eminent Fashion Magazine in Large Numbers, View Beautiful Pics.

Similar claims have been made in the past too. Nyakim's photos have been going viral on social media since months now, some making similar claims about her being the darkest woman and earning the title of the record.

But seeing similar claims, Guinness World Records too had cleared it on their Twitter account that they have no such category in the first place. They quoted to a tweet that made a similar claim. The Twitter handle also apologised for posting unconfirmed information.

So Guinness themselves have confirmed there is no such category that judges on skin tone. If you come across similar claims with regards to this Sudanese model you know they would be fake ones.

It is a fake report.

(The above story first appeared on LatestLY on Jul 16, 2020 05:35 PM IST. For more news and updates on politics, world, sports, entertainment and lifestyle, log on to our website latestly.com).