During coronavirus pandemic, several fake news and false information are going viral on social media, creating panic among people. One such fake WhatsApp claimed that recent fire incident at Mumbai’s Usha Kiran parking erupted due to hand sanitiser. The fake message asked the car owners not to leave sanitiser in their vehicles after parking. 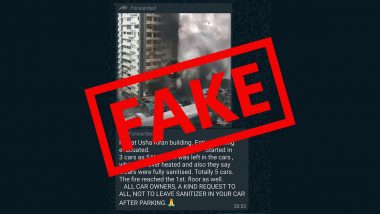 Mumbai, June 29: During the coronavirus pandemic, several fake news and false information are going viral on social media, creating panic among people. One such fake WhatsApp claimed that recent fire incident at Mumbai’s Usha Kiran parking erupted due to overheating of hand sanitiser. The fake message asked people not to leave sanitiser in their vehicles after parking.

The message states, “Fire at Usha Kiran Building, Entire Building Evacuated – Started in 3 cars as SANITISER was left in the cars, which got over heated and they also say 2 cars were fully sanitised. Totally 5 cars. The fire reached first floor as well. ALL CAR OWNERS, A KIND REQUEST TO ALL, NOT TO LEAVE SANITISER IN YOUR CAR AFTER PARKING.” WhatsApp Chatbot Now in Hindi to Curb COVID-19 Fake News.

Here is the Fake Message: 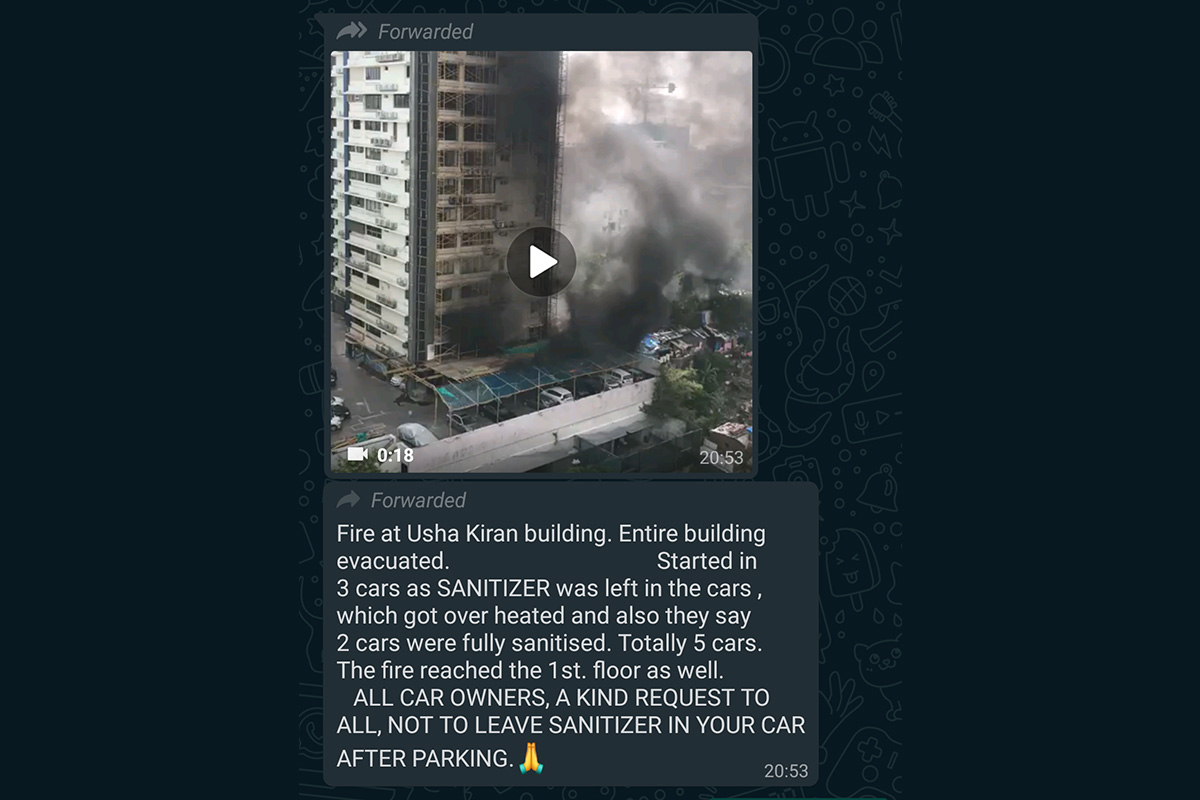 However, authorities denied such claims. Mumbai Fire Brigade’s Chief Fire Officer Prabhat Rahangdale revealed that the blaze was not caused by sanitiser. "As a first arriving officer at the scene of incident observed that entire vehicle was engulfed in fire, and high temperature and burning intensity was observed in the engine area, immediately within few minutes fire personnel extinguished entire fire by implementing two high-pressure fire fighting jets at a time during operation,” reported Free Press Journal quoting Rahangdale as saying.

During the preliminary inquiry, the owner of the car informed the department that he had not sanitised the car and there was no hand sanitiser left inside the car. He added that, when he parked the car at the ground floor, smoke started emitting from the engine. He, then he switched off the engine and left the vehicle. The Mumbai fire brigade also checked the CCTV footage of the parking to verify the car owner’s claim.

Experts believe that alcohol-based hand sanitisers cannot cause a fire on its own. On Saturday, the fire broke out at Usha Kiran building on Carmichael Road in Mumbai. A total of five cars were damaged in the blaze. No casualties were reported in the incident.

Fire at Mumbai's Usha Kiran building erupted due to overheating of hand sanitiser left in a car.

The viral WhatsApp message is fake. Smoke emitted from an engine of the car which caused the fire.

(The above story first appeared on LatestLY on Jun 29, 2020 09:53 PM IST. For more news and updates on politics, world, sports, entertainment and lifestyle, log on to our website latestly.com).