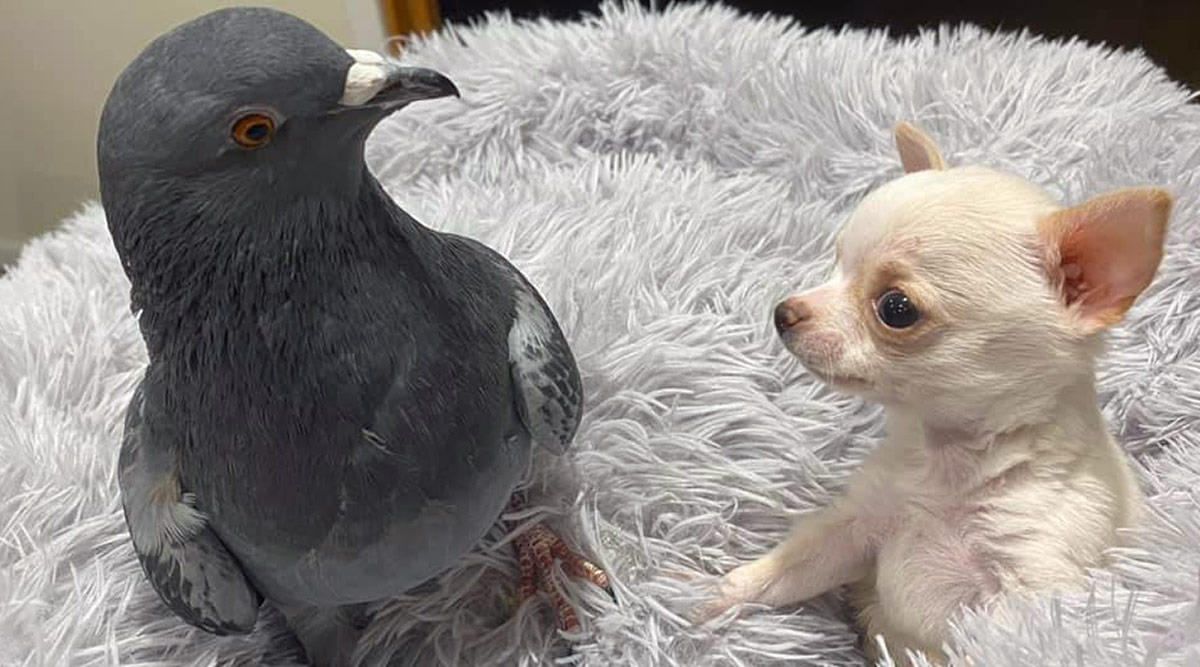 A pigeon that cannot fly and a puppy who cannot walk have formed an adorable friendship at an animal rescue centre in the United States. The two-month-old Chihuahua fondly called Lundy is very affectionate towards, Herman, the pigeon. This platonic love is blooming at the Mia Foundation, a New York-based non-profit which is dedicated to giving pets with birth defects across the country a fighting chance. Both the animals are very comfortable with the setup, as they were found next to each other, cuddling and adorably playing. The animal rescue centre shared photos and videos of this unique friendship, and the internet is cheering the love. Golden Labrador Adopts Nine Orphaned Ducklings; Twitter is Flooded with Pictures of the Cutest Bond!

The centre’s founder, Sue Rogers, said the pair are now inseparable and love to snuggle up together on their favourite purple fluffy blanket. According to the centre, Herman is a long-standing resident. And Lundy was brought into the centre by a North Carolina breeder who noticed the puppy struggled to walk. The animal rescue’s official Facebook page has uploaded pictures of this adorable bond during Valentine’s Day celebration, and people love them. Dog's 'Eyebrow' Birthmark Gets it Villainous Cartoon Names From Netizens.

See Pics of the Adorable Bond:

The pictures reached to almost 5 million people in just 24 hours. Netizens flood the comment section with “Aww” and hearts and everything adorable.

The Mia Foundation has also shared a video of the pair playing with each other in their favourite fluffy blanket. “WOW! I never imagined the pictures of Lundy and Herman would touch so many people! Almost 5 million people in a little over 24 hours!! Their little story is being shared all over the world!” reads the caption. Narwhal, the ‘Unicorn Puppy’ With Tail on His Forehead Adopted by Missouri Organisation That Rescued Him.

Initially, Rogers kept a close eye on the pair, keeping Lundy on the other side of the dog bed. But the two pets quickly gravitated towards each other and started cuddling. It is incredibly adorable to see such rare bonding between two animals.