Gal Gadot is literally over the moon after she witnessed her Wonder Woman 1984 trailer lighting up Dubai's Burj Khalifa. Well, this miracle did happen and we are not at all kidding. Check out the full story. 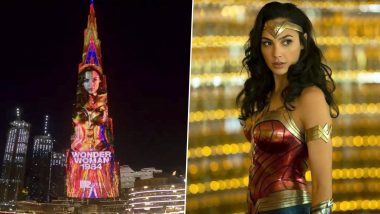 Fans of the DC extended universe are waiting with bated breath for the arrival of Gal Gadot's Wonder Woman 1984. The film is one of the highly anticipated releases of 2020 and high expectations are attached to it. However, before the flick's release, Gal Gadot is one cloud nine. Want to know why? As Dubai's Burj Khalifa just gave a fantastic tribute to WW84 by covering the tower with glimpses of Wonder Woman. This is insane and also echoes how influential Gal is as WW. The actress took to her Instagram and shared this big update. Gal Gadot Reacts to Wonder Woman 1984’s Early Reviews on Twitter.

Gal shared a video of Burj Khalifa standing tall and shining with Gal Gadot's Wonder Woman 1984 trailer from top to bottom. She captioned the post as, "This is unreal! #WW84 covering the Burj Khalifa tower in Dubai." Imagine, if the video shared by Gal looks so spectacular, then watching Burj Khalifa lighting up with WW84 trailer on the spot would be a visual treat for sure. We totally get it why she's this excited, as it is not less than an achievement. Wonder Woman 1984's Gal Gadot, Chris Pine, Kristen Wiig Recreate Iconic The Breakfast Club Poster (See Pic).

Wonder Woman 1984 is all the superhero and how she saves the world from yet another mayhem. The movie is set to release on HBO Max as well as in theatres, simultaneously. However, early reviews by the critics who have already witnessed the flick are superb. WW84 is directed by Patty Jenkins. Stay tuned!

(The above story first appeared on LatestLY on Dec 16, 2020 09:45 AM IST. For more news and updates on politics, world, sports, entertainment and lifestyle, log on to our website latestly.com).