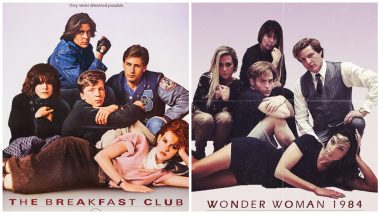 Wonder Woman 1984 cast just entered 1986. Pedro Pascal shared a picture with his colleagues in which they are paying homage to John Hughes' classic teen comedy/drama, The Breakfast Club, which released in 1986. Gal Gadot (Wonder Woman), Kristen Wiig (Cheetah), Chris Pine (Steve Trevor), and director Patty Jenkins along with Pascal recreated a very famous promotional image of the classic movie. "5 strangers (not really), with nothing in common (also nope), except each other (yeah, that). #WonderWoman1984 #WW84," Pascal wrote. Priyanka Chopra Excited to See Gal Gadot in Wonder Woman 1984, Calls the Actress a ‘Phenomenon’.

The film is releasing simultaneously on HBO Max and in theatres. While the review embargo on the film is still on, the social media embargo was lifted a few days back. Critics who have watched the film praised it on social media without giving out any spoilers or much details. Gal Gadot had reacted to the first reactions: "Can't wait to share this "beacon of hope" with the rest of the world and to hear what you guys think about it. You're the reason we're making these movies."

Talking about the film, Gal has said, "This film is about truth, which sounds simple but is, in many ways, very complicated. As people, we have to learn how to appreciate the here and now -- the truth of our situation -- but we also desire to set that aside for what we want, what we don't have, what is not the truth of our situation. Of course, we can try to have it all, but can we ever, really?"

(The above story first appeared on LatestLY on Dec 14, 2020 11:41 PM IST. For more news and updates on politics, world, sports, entertainment and lifestyle, log on to our website latestly.com).