As per a former Israeli space security general, aliens are already present on the planet but they are not revealing themselves because humanity is not ready. While others prepare to find these aliens on earth. Funny memes, jokes, GIFS and videos are trending online with reference to this piece about discovery of aliens. 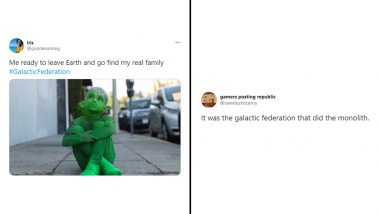 Did you have aliens on your list of what's happening in 2020? Well, that comes true, as Israeli space chief Haim Eshed revealed of a secret 'Galactic Federation' of aliens that is habituating on Earth. As per a former Israeli space security general, aliens are already present on the planet but they are not revealing themselves because humanity is not ready. In a recent interview he spoke about a lot more on these extra-terrestrials who have their base back in Mars! Soon as the news came up, netizens were quick with their reactions. In the midst of monolith mystery, of appearing and disappearing shiny structures in parts of the world, some have related to them to this Galactic Federation. While others prepare to find these aliens on earth. Funny memes, jokes, GIFS and videos are trending online with reference to this piece about discovery of aliens.

This is not the first time, the presence of aliens have made it to headlines in 2020. Earlier this year, when the Pentagon released videos of UAP files, there was similar reaction of funny memes and jokes. While, scientists have been working hard to find any trace of extra-terrestrial life on or around the planet, these recent revelations seem amusing. He adds that aliens do not want to cause mass hysteria with their presence and are waiting for humans to evolve more in their understanding of space and universe. But netizens are getting impatient and have already connected this Galactic Federation with the appearance of monoliths in different parts of the world.

Since #GalacticFederation is trending on Twitter, here is my take: pic.twitter.com/F37OyWaSp1

BREAKING: Alien from the Galactic Federation caught on camera after some tequila shots #GalacticFederation pic.twitter.com/OYtNmtRc7O

Checking In The Situation

The #GalacticFederation aliens doing their routine checkup tmr and seeing on Twitter that some guy from Israel snitched on em. pic.twitter.com/m1RPmqRaNd

It was the galactic federation that did the monolith.

Me sending signals to the Galactic Federation to take me with them #GalacticFederation pic.twitter.com/ViHdRt7xyt

They Are Behind The Monoliths...

wait, so is the GALACTIC FEDERATION behind all them #monolith . . . pic.twitter.com/wr9u3uQMYa

Me ready to leave Earth and go find my real family #GalacticFederation pic.twitter.com/Cc5P4YHQP3

So there is definitely a certain kind of excitement about this Galactic Federation, at least that's the mood of these memes and jokes. What do you think about this recent update on alien existence? Ready to come across some alien beings around you.

(The above story first appeared on LatestLY on Dec 08, 2020 06:30 PM IST. For more news and updates on politics, world, sports, entertainment and lifestyle, log on to our website latestly.com).