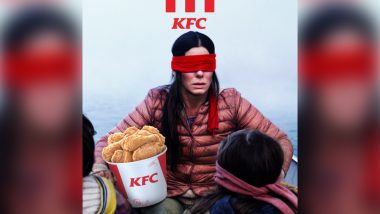 Netflix may have issued a warning to fans to stay away from the #BirdBoxChallenge, but viewers are all the more interested. The movie Bird Box which has struck a chord with the audience with viewers praising the makers. As word of mouth is giving further popularity to the movie, tonnes of funny memes and hilarious jokes on blindfolding has gone viral on social media.

The Netflix original movie is a post-apocalyptic psychological thriller, directed by Susanne Bier. It features Sandra Bullock who plays the mother of two children and goes through different physical and emotionally draining situations during the terrible time. The name Bird Box comes from the importance of birds in the movie who is the only ray of hope for humans. However, Twitterati can't get enough of Bird Box and have gone to create hilarious memes comparing daily situations with the movie. Netflix Warns Viewers Against Viral #BirdBoxChallenge; Urges People Not to 'End Up Hospital Due to Memes'.

Everyone outside the house in #BirdBox pic.twitter.com/WTtIv3jvdu

Not without my chicken bucket

Solves all my shopping issues

Finally when you get back eyesight

As people began to attempt Bird Box challenge at homes running into things with their eyes blindfolded, Netflix tweeted saying, "Can't believe I have to say this, but: PLEASE DO NOT HURT YOURSELVES WITH THIS BIRD BOX CHALLENGE. We don't know how this started, and we appreciate the love, but Boy and Girl have just one wish for 2019 and it is that you not end up in the hospital due to memes."

😂🙈 this would be me #BirdBox pic.twitter.com/2SGQC71JJi

In Bird Box, a mysterious creature evokes suicidal tendencies in people just by the sight of it. While it does not have a form or a shape, it makes you want to kill yourself. The only way to get away safe from the bird by not seeing it, for which people tie a blindfold. For people who have had sight all through their life, suddenly caused artificial blindness becomes difficult. Birds help humans in this scenario by chirping violently when the creatures approach, so people walk around with a minimum one bird in a box.

(The above story first appeared on LatestLY on Jan 07, 2019 05:25 PM IST. For more news and updates on politics, world, sports, entertainment and lifestyle, log on to our website latestly.com).