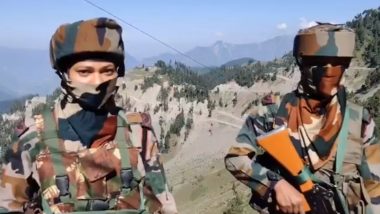 New Delhi, August 3: Recently, a video is going viral on social media claiming that ihe Indian Army deployed riflewomen along Line of Control (LoC) between India and Pakistan in Jammu and Kashmir. Netizens, including some journalists, shared the video of three women soldiers giving their introduction. However, in the video it is not clear as to which regiment these riflewomen belong.

In the video, the riflewomen wearing a combat uniform could be seen guarding the Indian borders. A reply to a tweet by a former Indian Army officer indicated that these women are from the Assam rifles, the oldest paramilitary force. Reacting to the video, Lt Gen (Retd) Satish Dua, called Assam Rifles “a fine force”. He had also raised and commanded a division of the force as a Major General. Women Officers in Indian Army Now Eligible For Permanent Commission, Govt Issues Formal Sanction.

Video of Riflewomen Giving Their Introduction:

Incredible! Indian Army Riflewomen deployed for the first time along Line of Control between India and Pakistan in Jammu & Kashmir. Proud to share this on Rakshabandhan! Here are the brave women soldiers protecting us all! Respect! pic.twitter.com/ZNUxJPQk4u

Lt Gen Dua tweeted, “Assam Rifles is a fine force. Have raised and commanded a Division as a Major General. Now they show the way re women in combat.” One of the netizens claimed the location where rifle women  were deployed was NH1 and not LoC.

Assam Rifles is a fine force. Have raised and commanded a Division as a Major General.

Now they show the way re women in combat 👍

(The above story first appeared on LatestLY on Aug 04, 2020 12:07 AM IST. For more news and updates on politics, world, sports, entertainment and lifestyle, log on to our website latestly.com).