A newly married couple has given his residence Mannat a stature of a temple. Since it is a tradition to visit a temple immediately after getting married to seek blessings for new beginnings. 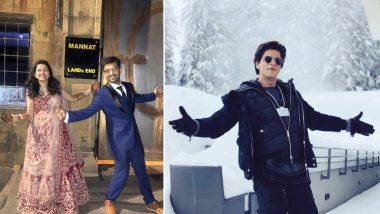 Shah Rukh Khan is undoubtedly the King of Romance and he has epitomised love in several of his movies. His fan following does not need to be separately spoken of. The way he spreads his arms and emotes love is something no one has been able to do. Currently busy with his upcoming release Zero, the actor had a pleasant surprise from his fans, which once again shows how much his fans look up to him. A newly married couple has given his residence Mannat a stature of a temple. Since it is a tradition to visit a temple immediately after getting married to seek blessings for new beginnings, the couple landed outside Mannat, the actor's residence in Mumbai. And while one would have joined hands in front of the deity, this couple imitated the famous SRK pose by spreading their arms and getting clicked. They shared it with Shah Rukh Khan himself and have also got a reply from the actor. Shah Rukh Khan-Salman Khan’s Zero Song Issaqbaazi Is Male Version of Dola Re Dola, Say Impressed Fans.

Getting clicked outside Mannat is not too novel but the couple had to share their story with the actor. Thanks to the reach of social media they tweeted their picture in their wedding outfits, posing outside Mannat to the actor and wrote that the actor waving at them made their day special. The actor acknowledged their sweet gesture and blessed the couple. Forget Zero, Shah Rukh Khan Looks Absolutely Unrecognisable in This New Project – Watch Video.

They say visit temple after you are hitched, We did it right !!!! @iamsrk we know you saw us and waved !!!! Thanks alotttt sirrr!!!! Thanks for making this special day, perfect !!!! pic.twitter.com/IaFnJ6ziVI

Probably the actor had watched the couple while they were at it. And with a blessing for their new beginnings, it was even more perfect day for the couple. Shah Rukh Khan is no less than God for his die-hard fans. One wave from the actor can really make a day for some and this couple sure got a lot more with his acknowledgement. That's sure a filmy way of getting married, or rather seeking blessings! On the professional front, the actor will be seen in Zero which will release on December 21.

(The above story first appeared on LatestLY on Dec 14, 2018 07:06 PM IST. For more news and updates on politics, world, sports, entertainment and lifestyle, log on to our website latestly.com).