Kamala Harris Wears ‘The Future Is Female’ Socks and Social Media Feels Empowered! Here’s Where You Can Buy the Beautiful Pair

Kamala Harris wears blue and white socks that read, “The Future Is Female.” Internet users are in love with her empowering choice of socks, and they want to get their hands on them too. Here's where you can buy them. 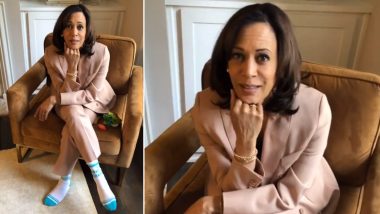 The Vice-President-elect, Kamala Harris is all set for the swearing-in ceremony on January 20, through a virtual inauguration day. Ahead of the big event, Harris and her socks are going viral on social media, and people cannot get enough of the pair. The blue and white threads read, “The Future Is Female.” Internet users are in love with her empowering choice of socks, and they want to get their hands on them too. But where can you buy them? In this article, we will know a little more about the beautiful socks giving powerful vibe to women across the world, as the video of Harris goes viral.

The US Vice-President-elect have always enjoyed some viral moments on the internet. Her outfits and of course, the signature sneakers and converse that she rocked during her campaign, are always appreciated. Even when she featured as Vogue February 2021 cover star, the VP-elect graced the photoshoot with the comfy sneakers. And while she is just days away from being sworn in as the first female Vice President of US, Harris is enjoying some viral TikTok fame.

Her niece, Meena Harris posted the video on TikTok, which later went viral on Instagram and Twitter, we see Harris chuckling over some peach-flavoured mints. The joke? Meena tells her aunt she got her some “im-peach-mints.” The pun cracked up the US VP-elect. But more than the humour, it was Harris’ socks that caught the netizens’ attention. In the video, Harris is wearing a very cute blue and white unisex crew socks that read, “The Future Is Female.”

You can buy them too! According to Glamour, the socks are from a company called Gumball Poodle, and it retails for USD 13, (Rs 951). The demand has increased for the socks for sure. You can click HERE to buy socks.

Kamala Harris and President-elect Joe Biden’s victory is historic. Harris is a daughter of immigrants and will become the first female, Black and South Asian American Vice President in America’s history.

(The above story first appeared on LatestLY on Jan 17, 2021 03:00 PM IST. For more news and updates on politics, world, sports, entertainment and lifestyle, log on to our website latestly.com).