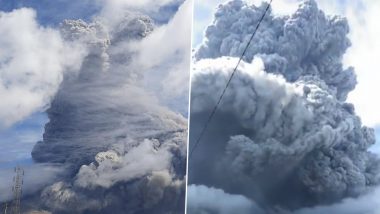 Mount Sinabung in Indonesia spewed out volcanic ash this afternoon. A massive amount of smoke and ash was spread across the area. The entire area was covered in darkness due to a thick layer of ash and debris. Over the weekend, a number of small eruptions had been reported in the area. Thankfully, there were no injuries or deaths from this morning but authorities have warned of eruptions in the future. Pictures and videos of the scenes after the eruptions have been shared on social media. Volcanic Mount Sinabung Erupted in Indonesia's North Sumatra Province, Spewing a 5,000 Metre-High Column of Ash to the Sky (Watch Video).

The volcano located on Sumatra island has been active for several years but it was inactive for about a year before it showed activity over the weekend. The mountain had erupted in February 2018. As per reports, the eruptions spewed ash almost 5,000 metres high in the sky. Villagers around have been asked to stay 5 kms away from the craters and warned of possible lava eruptions to follow. A thick layer of ash covered several villages and there was total darkness due to the clouds. The situation of the place has been shown from pics and videos on Twitter.

Check Pics and Videos of Mount Sinabung Eruption in Indonesia:

Pic of the Massive Ash Clouds

Video of a Large Eruption

Video of the Aftermath

This video shows tense atmosphere, changes the day into night. 2020 once again proved to be the shittiest year. pic.twitter.com/RqpJQmtG1A

Some More Pics of the Clouds

Eruption of #Sinabung volcano at 10:16 WIB on 10 Aug 2020 spewing 5-km high ash plume above its summit. Alert Level is being maintained at 3 on a scale of 1 to 4 w/ a general exclusion zone of 3-km & extension of 5-km on the SE & 4-km in the NE sector- Nachelle Homestay's Photo pic.twitter.com/5txbcQUCfd

Video of The Massive Clouds Compared to Homes

The pictures and videos look so dangerous. Thankfully, there have been no casualties in this calamitous situation. The last time this volcano erupted was in 2016 and it had claimed many lives. Mount Sinabung is among the two active volcanoes in the country currently.

(The above story first appeared on LatestLY on Aug 10, 2020 07:07 PM IST. For more news and updates on politics, world, sports, entertainment and lifestyle, log on to our website latestly.com).