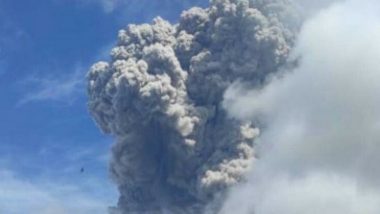 The 2,475 metre-high Mt. Sinabung is under an alert status, a local volcanology agency was quoted as saying by the Xinhua news agency.

In case of rains of ash, locals were expected to wear face masks outdoors to reduce health impacts, the agency said in a statement, adding that residents were also expected to keep unpolluted water and clean up their house roofs from thick volcanic ash to avoid possible collapses. Indonesia's Mount Sinabung Volcano On Sumatra Spews Massive 16,400 Feet Smoke-and-Ash Column.

The agency also called on people who live by rivers whose upstream in the volcano to remain cautious of possible hot and cool lava flowing to the rivers.

Mt. Sinabung erupted for the first time on Saturday, when the volcano spewed a column of volcanic ash up to two km high.

Sixteen people were killed and thousands of others were forced to flee home when it erupted in 2014.

Sinabung is one of the 129 active volcanoes in Indonesia, a vast-archipelagic nation home to over 17,500 islands.

(The above story first appeared on LatestLY on Aug 10, 2020 12:55 PM IST. For more news and updates on politics, world, sports, entertainment and lifestyle, log on to our website latestly.com).