National Paranormal Day 2022: Do Ghosts Exist? Check out Eerie Beliefs and Traditions from Around the World That Science Cannot Explain

Every year on May 3 National Paranormal Day is celebrated... or feared of? Depends. You must have heard of ghost stories during childhood, but have you ever seen a ghost in real life ? Now, there are so many theories. Of course, science doesn't believe in ghosts but people still do. 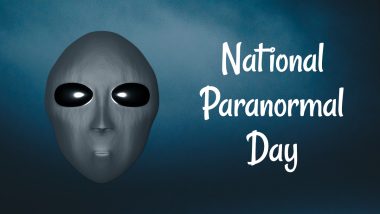 Every year on May 3, National Paranormal Day is celebrated... or feared maybe? Depends. You must have heard of ghost stories during childhood, but have you ever seen a ghost in real life? Now, there are so many theories. Of course, science doesn't believe in ghosts but people still do. Do YOU believe in ghosts? It is said that believing in ghosts and paranormal activities is very common. If we talk about common people, according to a survey conducted in America in 2019, 46% of people believe in ghosts. In this survey, 7% of the people also believe in vampires. Many people believe in paranormal activities and even life after death. National Paranormal Day 2022: From Nope to Halloween Ends, 5 Upcoming Horror Movies That Will Definitely Scare Your Socks Off!

It is said that sophisticated machines are used to see ghosts and check their presence by some who believe in paranormal activities. The most common of these machines are Geiger counters, electromagnetic field detectors, ion detectors, infrared cameras and sensitive microphones. But to date, ghosts have not been properly captured or seen using any of these instruments. It has been believed for centuries that the flames of fire turn blue in the presence of ghosts. But LPG gas emits mostly blue light, so do ghosts come out of the cylinder or do ghosts live in your kitchen? Well, the debate is never-ending. But meanwhile, we can  discuss beliefs about ghosts from all around the world. Check out:

Scientists today believe that at present there is no technology that can detect the presence of ghosts, their shape or behaviour. But the question also arises how often in photographs or videos of people, ghosts running from behind, smiling, peeping, scared are seen? Are they just coincidences? Well, we'll never know for sure. Also, who began these ghost-related traditions?  And if they did there must have been a good reason. Was it just for peace of mind in that case? Questions are many. Well, by the time we look for answers, we wish you a very happy National Paranormal Day!

(The above story first appeared on LatestLY on May 03, 2022 02:10 PM IST. For more news and updates on politics, world, sports, entertainment and lifestyle, log on to our website latestly.com).