Sexy Ice Cream Man Goes Viral as He Divides The Internet Over His Sultry Moves, Says He Regrets Making it (Watch TikTok Video) 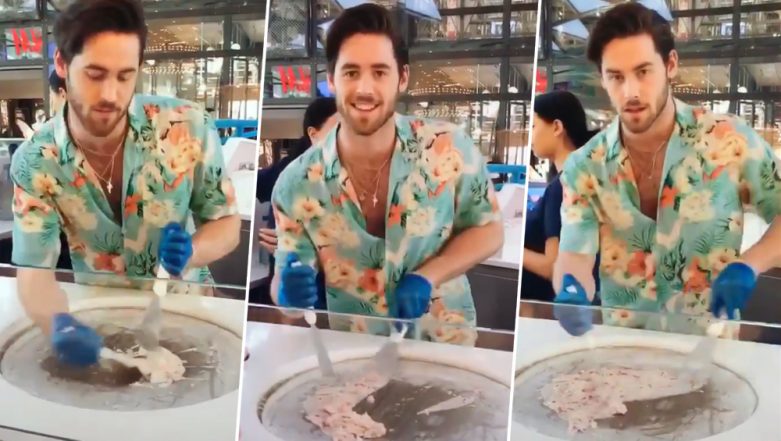 An ice cream vendor who has his own technique of making ice cream has divided the internet with his moves. Rob Huysinga, a 24-year-old from Berkshire is the co-founder of the ice cream chain Pan 'n' Ice. One of his videos on TikTok shared on International Women's Day which showed off his sultry gaze and thrusts while he made the ice-cream. The video went viral but it divided the internet between sexy and cringy! While some users found his moves and technique sexy, others have been criticising it. So much so, that Rob himself regrets doing that video. Salt Bae Is Back! This Time Nusret Gökçe Is Experimenting With Cheese (Watch Video).

Rob Huysinga made videos of him making frozen treats and while at it, he swayed along too well. He also said, 'ice cream makes you sexy guys' while he maintained eye contact with the camera. While he got dozens of admirers, like any counter opinion, he's not going viral for all positive reasons. He has been equally made fun of by people on the internet. Some of them have called him cringeworthy. Following all the criticism, he was quoted to Metro UK, "Upon reflection, with this particular video I have allowed myself to be misinterpreted and misconstrued." He said that the entire video has been taken out of context and would even like to apologise for the same. Man in Saudi Arabia Arrested After His Video of Having Breakfast With Woman Goes Viral.

Here's The Video of Sexy Ice Cream Man Which Is Going Viral:

The video has got over a million views with more and more people sharing it with their opinions. It has got over thousands of responses in a range from cheesy to creepy. While someone of them can't stop watching him, others just want to unsee what they have seen. The internet is literally whether he is sexy or not. Well, what do you think, is he sexy enough or you'll give it a pass and just take the ice-cream?