Shein Banned in India Funny Memes Flood Twitter, Fashion Lovers Can Seek Comfort in These Jokes As They Bid Farewell to the Chinese E-Commerce App 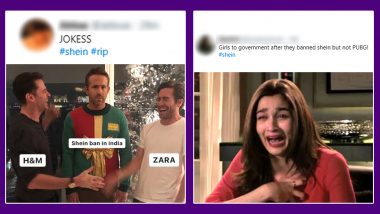 June 29, 2020, will surely be a date to remember, at least for a longer time. Late evening on the day, the Indian government decided to ban 59 Chinese Apps amid the border tension between the countries. TikTok, Shein, Club Factory, UC Browser were among the apps that are banned in the country. While it is a major blow to the TikTokers, fashion lovers in India as well are crying out loud, displaying their emotions as the nation also banned Shein among the many Chinese apps. The application which is immensely popular for primarily catering women and girls, will now no more be accessible. Every Shein lover have flooded the Twitter timeline with Shein banned funny memes and jokes. You can also seek comfort with these viral memes as a way to bid farewell to the Chinese e-commerce application. #TikTokBaninIndia Funny Memes and Jokes Trend on Twitter As Netizens Laud Govt's Move to Ban The Chinese App Among 59 Others.

Shein was founded in 2008 and became a quick hit in the country. Its clothing collection at affordable prices garnered the attention of Indian audience very well. But on June 29, 2020, the app found a mention in the long list of applications that have been banned by the Indian government. The 59 Chinese apps that are set to go off the Indian market were collectively termed as “engaged in activities which is prejudicial to sovereignty and integrity of India, defence of India, the security of state and public order.” PUBG Funny Memes Trend on Twitter as The Game Is Not Included in The List of 59 Banned Chinese Apps That Features Tiktok, Gamers Express Relief With Hilarious Jokes.

As the government announced the ban, it was natural for netizens to react. Given the pandemic and most of the people are confined indoors, the decision received way more reactions. While some lauded the move, especially the ban for TikTok India, people also came forward to bid farewell to the famous brand Shein. The memes and jokes accurately describe the emotions RN, especially for those who have been quite a fan of the online application.

Here Are the Reactions!

Girls to government after they banned shein but not PUBG!#shein pic.twitter.com/ZtBRLZsekr

After hearing that @narendramodi banned #shein

Girls when they see #Shein is also ban ! pic.twitter.com/cAGhqNPxCF

Who Already Paid for Their Order!

#SHEIN Girls who have prepaid orders from #shein after the ban. pic.twitter.com/Lj9nKotntE

Girls who have prepaid order from #shein be like :

We Will Miss You Shein Wishlist

Me who had clothes and accessories wishlisted which I was planning to buy pic.twitter.com/fIyl93ds6H

Aren’t they so relatable? To those who are unaware of the complete list of mobile applications now banned in the country, you can check the details HERE. Meanwhile, let us all have a few minutes of silence for all the Shein points, your wish lists and of course, for the app that we won’t be able to access anymore.

(The above story first appeared on LatestLY on Jun 30, 2020 01:46 PM IST. For more news and updates on politics, world, sports, entertainment and lifestyle, log on to our website latestly.com).