'View From Malad Balcony' Viral Twitter Thread Has Users Sharing Fake Pics of Indian Places Just to Have Some Fun!

A Twitter user shared a picture of Tokyo Night Sky, calling it a view from Malad in Mumbai. So netizens are now sharing "never seen before" pictures from India which you would not even see in reality, because they aren't from India after all. 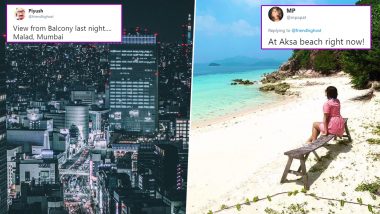 India is pretty amazing and has some great places to visit, but someone decided to have a little fun online, and it is going viral. A Twitter user shared a picture of Tokyo Night Sky, calling it a view from Malad in Mumbai. And well, the tweet went viral with over 6,000 likes. It also started a fun thread where people joined along in sharing beautiful pictures from abroad with sarcastic captions, of popular tourist spots from the country. It soon escalated to posting photographs of planets too. So netizens are now sharing "never seen before" pictures from India which you would not even see in reality, because they aren't from India after all. Would You Kiss a Stranger For Picture? Woman Reveals She's Done it at Eiffel Tower, Many Others Join In (Check Viral Twitter Thread).

It has become like a fun trend online after the tweet went viral. A Twitter user named Piyush who goes by handle @friendliighost, shared a beautiful picture of Tokyo skyline at night. In his caption, he wrote, "View from Balcony last night.... Malad, Mumbai". While some users were quick to figure it out that it is not actually from Malad, others joined to have fun in the same vein. So as the tweet went viral, people shared beautiful photographs from around the world but named them as popular locations in the country. The tweet has now turned into a viral thread with funny responses. KUTTI or KUTTY? This Funny Twitter Thread Will Shatter all the Dreams of 'One Nation, One Language'.

As the tweet went viral, people began to have some fun adding in their own creativity in making new places. Check some of the funny replies on this tweet.

Yamuna River With a Rainbow!

If Bihar Got a Makeover Too

Palm Beach Road is So Exotic!

Seeing the tweet go so viral, the user clarified by sharing a real picture from Malad which he had clicked a few months ago.

Btw This is real pic from Malad, Its western Express Highway and U can see Oberoi Mall and Westin. clicked months ago.. pic.twitter.com/i2d4XX7mbJ

For someone who hasn't been to India even once, this Twitter thread can be confusing too but let us tell you, its all in good humour. It just started as a  sarcastic tweet and soon users joined in.

(The above story first appeared on LatestLY on Nov 21, 2019 07:10 PM IST. For more news and updates on politics, world, sports, entertainment and lifestyle, log on to our website latestly.com).