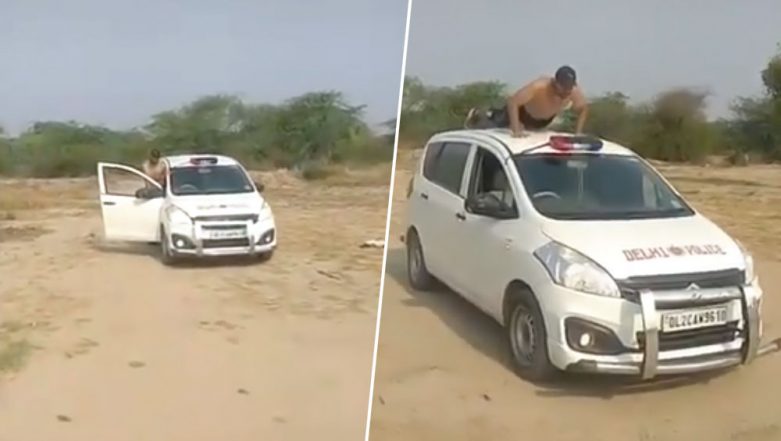 In a Tik Tok video, that is now going viral a man can be seen performing a dangerous stunt in a vehicle marked "Delhi Police" is taking social media by storm. The video that seems like someone from the Delhi Police staff is doing it, has caught the attention of Twitteratti who cannot help but be shocked! The man performing dangerous stunt is making the internet furious as he can be seen mounted on the car shirtless and it has a beacon light mounted on the top and ‘Delhi Police’ mentioned on the bonnet. However, the Delhi Police was quite quick to reciprocate and mentioned in a tweet that they have acknowledged the complaint raised on social media and were looking into the matter. Video of Sikh Driver Beaten by Delhi Police Goes Viral, Arvind Kejriwal Calls For Strict Action.

Take a look at the video of the man performing a stunt on a "Delhi Police" vehicle:

Delhi Police replied to Saurabh Trivedi, @saurabh3vedi who complained to the Delhi Police saying, "Save[sic.] driving, anyone? @dtptraffic . @DelhiPolice Official vehicle is used to perform stunt and make #tiktokindia video." with "Thanks, This complaint has already been forwarded to senior officers for taking necessary action in this regard." Delhi Cop's Son Seen Thrashing Woman in Viral Video Arrested by Police, After Rajnath Singh Orders Action.

Thanks, This complaint has already been forwarded to senior officers for taking necessary action in this regard.

People are trolling Delhi Police for this video. Take a look at some of the reactions:

Someone came up with the car details via the registration number and the vehicle was found to be registered in the name of some J.P. Sharma.

Is this even a police vehicle? The RC check shows it belongs to an individual. pic.twitter.com/o0NIXA0hC1

Shame on you and shame on your staff who use official vehicle for making tiktok videos. Please show some outrage and apologise.

This is a perfect example of what can go wrong with the obsession of becoming famous via TikTok videos. With the craze of TikTok videos only increasing and reaching a dangerous level, it is a matter of concern.