The Home Minister's order came after the video went viral since on social media. 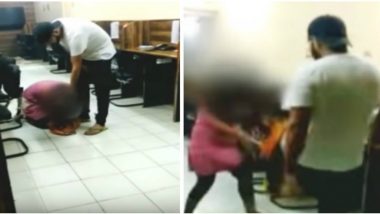 New Delhi, September 14: Rohit Tomar, who was seen beating a woman in a viral video in Delhi's Tilak Nagar, was arrested on Friday and sent to one day police remand by Court. Home Minister Rajnath Singh on Friday had directed Delhi Police Commissioner Amulya Patnaik to take necessary action on a video which showed a man severely beating up a woman. The man seen beating the woman, who was arrested today, is a cop's son, said media reports.

The home minister's order came after the video went viral since on social media. Check the tweet below:

"I have taken note of a video where a youth has been seen severely beating a woman. I have spoken to the Delhi Police Commissioner over the phone and directed him to take necessary action in this regard," Singh tweeted. Below is the video of young man mercilessly beating the woman inside a Delhi office:

According to media reports, police in West Delhi have registered an FIR against Rohit Singh Tomar after a woman filed a complaint on watching the video. Shocking! 40-Year-Old Kolkata Wife Cuts off 20-Year-Old Husband's Ears at Gunpoint.

Police said the video was shot on September 2 in Uttam Nagar. They were on the lookout for the accused who has now been arrested. According to latest update, Rohit Tomar, the man seen beating the woman in the video, was produced in a court after his arrest.

(The above story first appeared on LatestLY on Sep 14, 2018 03:41 PM IST. For more news and updates on politics, world, sports, entertainment and lifestyle, log on to our website latestly.com).