Was Zayn Malik Smoking a Joint on Instagram Live? Fans Wonder if Singer Was Getting High (Watch Video)

Zayn Malik went live on his Instagram and while he interacted with his fans, he was seen smoking. The smoking part is getting mixed reactions on social media as some fans droll over him, while others are not too impressed. Zayn Malik is now trending on Twitter following his live session. 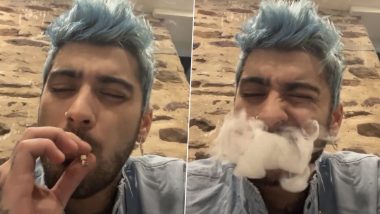 Singer Zayn Malik has a great fan following, will be a thing too old to state. The singer recently dropped a new album 'Nobody is Watching' and has been actively promoting it. This evening, the singer went live on his Instagram and while he interacted with his fans, he was seen smoking on camera. The smoking part is getting mixed reactions on social media as some fans droll over him, while others are not too impressed. Zayn Malik is now trending on Twitter following his live session. Some question if the singer was really getting high on his Instagram live session. Recently, on his birthday fans were sharing his pictures and sharing their heartfelt wishes for him.

The singer in his live even appreciated his fans from India. He wrote, "Love you India" for all his back here. Also in his song, "Tightrope" from the new album the former One Direction member croons a part of "Chaudavin ka Chand" which has once again struck chords with the Indian fans. However, in his latest live session, he appears to be smoking weed and that part is being replayed and shared on Twitter. Pics and videos of Zayn Malik smoking on the live session are being shared online. Zayn Malik Makes His Musical Comeback with New Song 'Vibez'.

Here Are Some Reactions to Zayn Malik's Smoking:

Smoking a weed/cigarette or wtv is smoking, whether it be Zayn or any commoner, it's not attractive and nobody does it for attraction

Other Men Smoking Over Zayn Malik

zayn malik in his live: pic.twitter.com/TG2Trhq8re

Was He Smoking Pot?

zayn was smoking pot? and i missed it? ok

I can't believe that these girls are putting up statuses of Zayn Malik smoking a cigarette. Smoking was, is, and will never be a cool or a hot thing fgs.

Clearly, the die-hard fans of the singer cannot stop drooling over his pictures, or rather his entire appearance and attitude during this live session. Clearly, the singer's popularity is making him rule the trends right now.

(The above story first appeared on LatestLY on Jan 17, 2021 08:51 PM IST. For more news and updates on politics, world, sports, entertainment and lifestyle, log on to our website latestly.com).