Star Wars franchise has seen quite a high number of toxic fan love and hate, especially after the extremely divisive The Last Jedi and Solo. 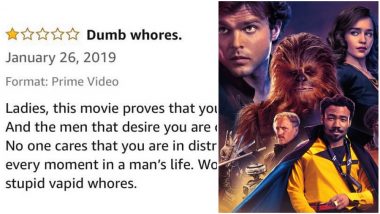 You can call Solo: A Star Wars Story a disappointment. You can call it a box office flop. And if you share the views I have on the film, then Solo is an underrated, yet enjoyable Star Wars film that underperformed because of the whole negativity surrounding its release. Whatever your thoughts about the movie are, the last thing you would think of the film is a scathing insight on how women leave you for losers. Well, that's what an Amazon user thinks about the film! Solo: A Star Wars Story Underperforms at the Box Office; 5 Reasons Why It Failed To Create Magic.

If you are following this handle called @AmznMovieRevws, you know that they share some very hilarious user reviews of movies (and occasionally, other stuff) posted on Amazon product review section. The below tweet was shared of a user who, by the looks of it, was forced by friends to watch Solo just when he was going through a bad breakup! Calling women terms, like 'worthless' and 'wh*res', the user laments why they can't sense when a man is in distress. Perhaps the scene where Qiira (Emilia Clarke) double-crosses Han Solo (Alden Ehrenreich) in the climax of the film has affected him very deeply. Solo A Star Wars Story Movie Review: The Force is Good With the Action Sequences and Some Surprising Twists.

His 'views' on the film make Twitterati have some very funny, and sometimes, nasty, things to say about his trauma!

How to advertise to the entire world that you're single and bitter: 101 https://t.co/G23ILOwSPo

Star Wars franchise has seen quite a high number of toxic fan love and hate, especially after the extremely divisive The Last Jedi and Solo. However, this is not the kind of reaction that they would have thought in their wildest of dreams! As for Mr Heart-Broken, well, May The Force Be With You!

(The above story first appeared on LatestLY on Jan 29, 2019 07:51 PM IST. For more news and updates on politics, world, sports, entertainment and lifestyle, log on to our website latestly.com).