Solo: A Star Wars Story Underperforms at the Box Office; 5 Reasons Why It Failed To Create Magic

In what can be said as a shocker for all Star Wars fans, the franchise's latest entry, Solo: A Star Wars Story, is turning out to be the most disappointing in the series, box office wise. 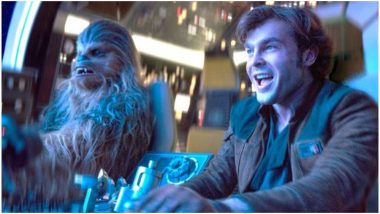 A Still from Solo A Star Wars Story

In what can be said as a shocker for all Star Wars fans, the franchise's latest entry, Solo: A Star Wars Story, is turning out to be the most disappointing in the series, box office wise. The spinoff based on the adventures of a young Han Solo, had released worldwide on May 25 and didn't manage to impress enough both the North American audiences and the overseas viewers. Solo: A Star Wars Story is directed by Ron Howard and stars Alden Ehrenreich, Woody Harrelson, Emilia Clarke, Donald Glover, Thandie Newton, Phoebe Waller-Bridge, Joonas Suotamo and Paul Bettany.

As per a report in Forbes, the movie has collected $103 million over the weekend, while it has performed even more disappointingly overseas with only $65 million earnings. This makes Solo getting the lowest opening weekend ever since the Star Wars franchise began its new phase with 2015's The Force Awakens. Many fans are blaming the Star Wars fatigue for the underperformance of the movie, but Disney distribution chief Dave Hollis doesn't agree with this theory. Speaking to The Hollywood Reporter, he said, "We are all over it, and will spend a lot of time digging into why things happened the way they did. We have a year and a half before Episode IX comes out. We've had so much success. The previous three Star Wars films did $4 billion worth of business at the box office, so it doesn't feel like saturation is necessarily an issue, but we are still answering all of the questions."

So if not SW fatigue, what caused Solo to underperform at the box office? It may not be just one factor, but a combination of the below five that might have caused the decline.

If you are aware of Solo's production issues, you would be surprised that the movie turned out to be this decent. The original directors, Phil Lord and Christopher Miller, were shown the door by the studios after the latter was unhappy with the directors' take on the movie. They hired Ron Howard to take the mantle, and the Inferno director had to reshoot 70% of the movie. There were also reports that the studios hired an acting coach for Ehrenreich, cos they were unhappy with the performance. With such issues making news, fans of the franchise must have been quite wary of the final product.

When the first teaser of Solo landed, the majority of the fans were left underwhelmed by what they saw. There was no wow factor in it, save for Glover's eye-catching appearance. The trailer that followed was definitely better and yet wasn't too impressive enough. As they say, the first impression always makes a lasting one.

We don't know about Star Wars fatigue, but the viewers definitely might be going through summer blockbuster fatigue. We already had two blockbusters in the form of Avengers Infinity War and Deadpool 2, both impressing well at the box office and earning big bucks. It was a difficult task for Solo to follow up on them, coming just a week after Deadpool 2's release. Perhaps if the movie had released in December, as SW movies usually do, Solo might have done better business.

Solo is not a bad movie, as the general perceptions state. It is a decent thriller with some enjoyable performances, unexpected twists and engaging action sequences. But Solo doesn't redefine the formula in any way, it is more or less harmless entertainer. With Infinity War, Deadpool 2 and even the divisive Star Wars movie, The Last Jedi, redefining rules in a blockbuster movie, fans expected a lot from Solo. Unfortunately, the makers failed to serve it in a different plate! Also what was with the dark colour tone?

While we gave a generous review to Solo, not everyone was kind enough to the movie. Fanboys, in general, was disappointed with some of the lazy shoehorning in the premise (how Han Solo got his name), and many pointed out that the movie feels like more of a money-minting exercise for the studios, rather than a good effort.

Solo: A Star Wars Story ended with a promise of a Han Solo-centric trilogy. But going by the box office performance of the movie, it would be too optimistic to think Disney would be going ahead with their expansion plans for Solo.

(The above story first appeared on LatestLY on May 28, 2018 09:29 PM IST. For more news and updates on politics, world, sports, entertainment and lifestyle, log on to our website latestly.com).