India had played only one T20 International before the World T20 – which was back in 2006. Also, they had only one domestic T20 tournament up until then – played in the aftermath of India's exit from the 2007 World T20. Yusuf Pathan and Rohit Sharma shined in that actually and made their way through. 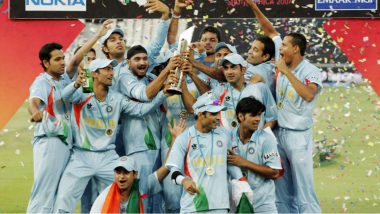 It's been 12 years since that epochal triumph at the World T20 – who had thought MS Dhoni's men would overcome the odds and record a win that would go on to change cricket history. When I look back at that day – September 24, 2007 – it almost feels as if it was yesterday – Indian cricket was never the same after that. For a nation, who's majority is a young population – this was momentous. Sachin Tendulkar, Rahul Dravid and Sourav Ganguly – the demi-gods of Indian cricket had given the nation belief – but a bunch of young turks under a youthful leader – went on to lift the title.

While we remember all the big moments, let us also look back at some of the lesser remembered facts about India's triumph…

India were just coming off a tour of England, which finished on September 8, merely three days before the tournament kicked off in South Africa. Nine players from that ODI squad flew directly to South Africa from England. The other six arrived from India – which included the likes of Virender Sehwag, Harbhajan Singh and Irfan Pathan, who were making a comeback and had been axed following the 2007 World Cup. What's more is, Chandu Borde was India's cricket manager in England, but in South Africa, Lalchand Rajput took over – so not only was the squad just assembled in the lead-up, but they had a different man at the helm as well. India’s Victory Over Pakistan in ICC T20I World Cup 2007 Final Relived by Indian Cricket Fans, Twitter on Fire with Posts Celebrating MS Dhoni and Boys’ Triumph.

India had played only one T20 International before the World T20 – which was back in 2006. Also, they had only one domestic T20 tournament up until then – played in the aftermath of India's exit from the 2007 World T20. Yusuf Pathan and Rohit Sharma shined in that actually and made their way through.

Now, no one knew what to expect from India or the captain – MS Dhoni. Aged 26 at the time, Dhoni was a little under three years old in international cricket. He had never captained India in an international before this. During the tour to England before the World T20, he had only led India in a tour match against England Lions. So, effectively, he had the experience of captaincy in one game before coming into this tournament.

The Oldest Member of The Squad

Ajit Agarkar, who had played nearly a decade at the highest level, was the oldest member of the squad at 29. Sehwag was next at 28. Sadly for Agarkar, his international career ended during this tournament once he was dropped from the side after the defeat to New Zealand.

The Scottish Affair and IPL's Birth

India's first game was actually against Scotland, and that counted because there was a toss before the rain came down hard. They were grouped with Scotland and Pakistan. Even as India prepared for Scotland on September 13, miles away in India, the BCCI announced the inception of the IPL – and who was present at the opening – Tendulkar, Ganguly, Dravid, Kumble, Stephen Fleming and Glenn McGrath. While the young man's game was taking the world by storm in South Africa, veterans were welcoming the arrival of a new era in the sport.

We all remember the famous bowl-out against Pakistan – where India hit three on the stumps, and Pakistan missed. Sehwag, Harbhajan and Robin Uthappa hit the stumps and Pathan and Sreesanth were unused. However, do you know that Rohit Sharma was rated as India's best bowler in bowl-outs during practice but since he wasn't in the playing XI, he couldn't bowl. Also, while India practiced for the bowl out, Pakistan were clueless about the rules, and they didn't know about this till the very end.

Gautam Gambhir finished as India's leading run-scorer in the tournament and second overall. Now, let me ask you a question: Who was India's second-highest run-scorer in the tournament? A lot of you would speak about Yuvraj Singh – the man who hit six sixes in an over, and that remarkable 70 in the semi-final. Well, what if I told you that MS Dhoni scored more runs in the tournament than Yuvraj and finished behind Gambhir. Yes, Dhoni got those crucial cameos in every game, and his batting largely flew under the radar. Against South Africa, he scored 45 to help India recover after early jolts, in the semi against Australia he got another quick-fire 30 to power India past 180. He also did his bit against Pakistan in that famous bowl-out game.

Perhaps he was all spent after that magnificent effort. So much so that Yuvraj did not play in the crunch game against South Africa as he was out with an injured elbow. Dinesh Karthik came in instead, and although he didn't trouble the scorers with the bat, he took a magnificent catch to dismiss Graeme Smith – which put India on course to victory.

Yusuf Pathan was brought into the side for the final against Pakistan to replace the injured Virender Sehwag. To date, Pathan is the only man to make his debut in the final of a major ICC tournament – includes the World Cup, Champions Trophy and the World T20.

(The above story first appeared on LatestLY on Sep 25, 2019 02:03 PM IST. For more news and updates on politics, world, sports, entertainment and lifestyle, log on to our website latestly.com).