Ahead of MS Dhoni’s Birthday, Fans Trend #DhoniBirthdayCDP on Twitter 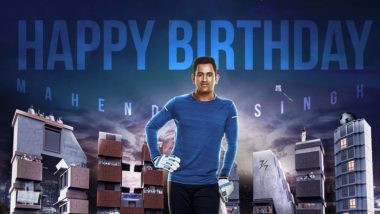 MS Dhoni will be celebrating is 39th birthday on July 07. Ahead of Chennai Super Kings (CSK) captain’s birthday fans trended #DhoniBirthdayCDP on Twitter. High Performance Analyst of CSK, Lakshmi Narayanan, unveiled a common display or profile picture which fans will set on Dhoni’s upcoming birthday. Thus, #DhoniBirthdayCDP was trending on Twitter. Fans were happy to share the poster which has been designed by NextGen Studios. Interestingly, the theme of the DP has been kept around blue instead of CSK’s trademark yellow colour. MS Dhoni New Look Photo Surfaces on Twitter, Check Out CSK Captain's Latest Beard Style.

The DP or profile picture reads Happy Birthday Mahendra Singh with large than life portrait of Dhoni. At the bottom of the poster, one can see children playing cricket in a society compound. The DP has a tagline as well which reads ‘Inspiring Millions’

Here’s a look at the poster/DP

Happy to be releasing the Common DP to celebrate @msdhoni's birthday!

So, don’t be surprised if you spot common Dhoni DP on your social media feeds on July 07. Dhoni enjoys a huge fan base, not just for the national team but CSK as well. Dhoni’s fans often express their love for the star cricketer on social media. MS Dhoni Turns Farmer, CSK Captain Seen Ploughing Field on a Tractor at His Ranchi Farmhouse (Watch Viral Video).

Dhoni has been out of action for almost a year now and was looking to make a comeback in the Indian Premier League (IPL) 2020, which has been suspended indefinitely following the coronavirus pandemic outbreak. Nonetheless, come July 07, Dhoni fans will be all over the internet to celebrate their favourite cricketer’s birthday. It is going to be a huge event in itself.

(The above story first appeared on LatestLY on Jun 27, 2020 11:11 PM IST. For more news and updates on politics, world, sports, entertainment and lifestyle, log on to our website latestly.com).