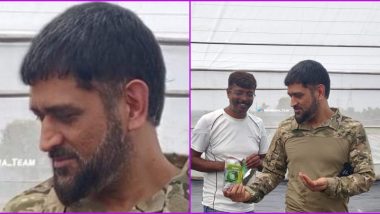 After Mahendra Singh Dhoni’s video of ploughing field on a tractor went viral, Chennai Super Kings (CSK) captain’s new look photo has surfaced on Twitter. A fan page has shared Dhoni’s latest look in which former Indian cricket team captain can bee sporting a new beard style. The photo appears to be recent as Dhoni is seen holding a packet of seeds on his hand. Amid coronavirus pandemic, Dhoni shifted to his farmhouse in Ranchi and has been spending time with his family there. MS Dhoni Turns Farmer, CSK Captain Seen Ploughing Field on a Tractor at His Ranchi Farmhouse (Watch Viral Video).

Dhoni, by the looks of it, is these days busy with organic farming. Earlier, Dhoni’s photos went viral in which the former skipper appeared old. It will be interesting to see how fans react to Dhoni’s latest style. MS Dhoni Song: Chennai Super Kings All-Rounder Dwayne Bravo Reveals Release of New Song on CSK Captain's Birthday (Watch Teaser).

Before the coronavirus lockdown was announced, Dhoni was preparing for Indian Premier League 2020. The IPL 2020 was postponed following the COVID-19 crisis, and Dhoni left Chennai. The wicketkeeper-batsman was looking to make a comeback to cricket field following the sabbatical he took post-ICC Cricket World Cup 2019 semi-final against New Zealand. It has been close to a year now, since we saw Dhoni last in action.

(The above story first appeared on LatestLY on Jun 27, 2020 09:52 PM IST. For more news and updates on politics, world, sports, entertainment and lifestyle, log on to our website latestly.com).