Arjun Tendulkar was picked by defending IPL champions Mumbai Indians at the IPL 2021 players auction for his base price of Rs 20 lakh. While questions were raised about Mumbai Indians going for Sachin's son, franchise head coach Mahela Jayawardene confirmed Tendulkar junior was picked purely based on his skills. 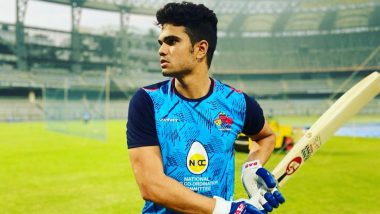 Arjun Tendulkar was picked ‘purely on skill’ and will have to prove himself for a place in the aid Mumbai Indians head coach Mahela Jayawardene after the defending IPL champions picked Arjun for his base price of Rs 20 lakh at the IPL 2021 players auction in Chennai on February 18 (Thursday). Arjun, son of legendary cricketer Sachin Tendulkar, was the final pick at the mini-auction, which saw Rajasthan Royals shell out a record Rs 16.25 Crore to make Chris Morris the most expensive player in Indian Premier League history. Arjun Tendulkar Reacts After Being Bought By Mumbai Indians At IPL 2021 Players Auction, Says Was Childhood Dream to Play for Them (Watch Video).

While Morris’ bidding smashed the records, Krishnappa Gowtham became the most expensive uncapped player after fetching Rs 9.25 Cr at the auction. Chennai Super Kings picked Gowtham. Punjab Kings also broke the bank for Australian seamer Riley Meredith making the 24-year-old the most expensive overseas uncapped player in the IPL after picking him for Rs 8 crore. Sara Tendulkar Reacts After Arjun Gets Picked by Mumbai Indians in IPL 2021 Players Auction!

But while the hammer kept hitting and bids kept rising, all eyes were on Arjun Tendulkar, with fans eagerly waiting for his name to be announced. Surprisingly his name was announced in the first round. Eventually, Arjun’s name was the last to be called and Mumbai Indians immediately raised the bid and bought the junior Tendulkar.

"We've looked at it purely on a skill basis,” Jayawardene was quoted as saying by ESPNCricinfo. I” mean, there is going to be a big tag on his head because of Sachin. But, luckily, he's a bowler, not a batsman. So I think Sachin will be very proud if he could bowl like Arjun.” The 21-year-old has been a net bowler for Mumbai Indians for the last couple of seasons and had also travelled with the team to UAE for last year’s IPL.

"I think it's going to be a learning process for Arjun. He just started playing for Mumbai, and now the franchise. He will learn the ropes; he will evolve. He's still young. A very focused young man," he added. "We have to give him time and hopefully not put a lot of pressure on him either. Just let him evolve and work his way up, and that's what we're there to help him to do.”

Arjun also thanked the franchise for showing faith in him. “Since childhood, I’ve been a die-hard fan of the Mumbai Indians … I’m excited to join the team and can’t wait to wear the blue-and-gold,” he said.

(The above story first appeared on LatestLY on Feb 19, 2021 04:19 PM IST. For more news and updates on politics, world, sports, entertainment and lifestyle, log on to our website latestly.com).