Bangladesh vs Zimbabwe, T20I Series 2020, Key Players: Tamim Iqbal, Sikandar Raza, Liton Das and Other Cricketers to Watch Out for 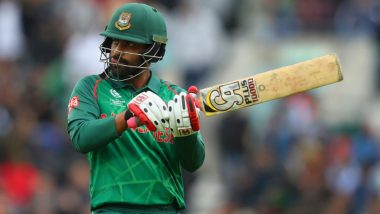 After the three-match One-Day International (ODI) series Bangladesh and Zimbabwe will now lock horns in game’s shortest format- T20. The T20 series between Bangladesh and Zimbabwe comprises of just two T20Is, and both the matches will be played at the Shere Bangla National Stadium in Dhaka. Zimbabwe suffered whitewash in the ODIs and now will be looking to bounce back in the T20Is. Considering the format, the series is expected to be a closely fought one. However, Bangladesh will start as favourites once again. Meanwhile, let’s have a look at the key players from both the sides. Bangladesh vs Zimbabwe Head-to-Head Record: Ahead of 1st T20I 2020, Here Are Match Results of Last Five BAN vs ZIM Twenty20 Encounters.

Tamim Iqbal: The left-handed opening batsman continues to be Bangladesh’s batting mainstay. Tamim scored two centuries in the three-match ODI series and will be looking to emulate his performance in T20Is as well.

Sikandar Raza: The all-rounder posted two half-centuries in the ODI series and is one of the central figures in the Zimbabwean line-up. In the T20Is, Raza plays an important role in bating department as he can up the ante at will. He is handy with his off-break as well. Bangladesh vs Zimbabwe Dream11 Team Prediction for 1st T20I Match.

Liton Das: Just like Tamim Iqbal, Liton Das was in superb form in the ODI series. The right-hander smashed two centuries as well. However, in T20Is here is some doubt whether Das will open the innings or not. Considering his good form, Bangladesh should let him open.

Sean Williams: Captain Sean Williams is an important member of the Zimbabwe team. He has been perfuming well with both bat and ball. In his last three T20I outings, he has two half-centuries. However, those were in September-October.

Afif Hossain: The youngster is regarded as one of the best upcoming talents. He was handed ODI debut in the third game against Zimbabwe. In ten T20Is, he has one half-century, which came in his second match, interestingly against Zimbabwe. Since then, he has not performed well. So, Afif will be under some pressure and who knows that will bring best out of him.

(The above story first appeared on LatestLY on Mar 09, 2020 02:18 PM IST. For more news and updates on politics, world, sports, entertainment and lifestyle, log on to our website latestly.com).