Zimbabwe can take heart from the fact that they beat Bangladesh twice in their last four meetings prior to this two-match T20I series. Sean Williams will hope those wins will inspire his side as they chase their first win in the tour after four defeats. Zimbabwe were thrashed by an innings and 106 runs in the Test match and lost the ODIs by 169, 123 and four runs respectively. 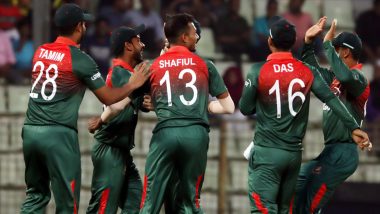 Bangladesh will eye a series whitewash when they host Zimbabwe in the first of a two-match T20I series. Bangladesh trounced Zimbabwe in the one-off Test match before also defeating the African side in the One-Dayers and completing a clean sweep in the three-match ODI series. A win against Zimbabwe in the 1st T20I match will also be Bangladesh’s first Twenty20 International match victory in the year 2020 after three successive defeats. They are also on a five-match losing streak in T20I cricket but have a dominant record against Zimbabwe in T20I head-to-head records having beaten them seven times in 11 meetings. Meanwhile, as both Bangladesh and Zimbabwe face each other in the 1st T20I match, take a look at the results of the last five BAN vs ZIM encounters in T20Is. Bangladesh Vs Zimbabwe, Cricket Score 1st T20I Match.

Zimbabwe, however, can take heart from the fact that they beat Bangladesh twice in their last four meetings prior to this two-match T20I series. Sean Williams will hope those wins will inspire his side as they chase their first win in the tour after four defeats. Zimbabwe were thrashed by an innings and 106 runs in the Test match and lost the ODIs by 169, 123 and four runs respectively. They came close to winning the final ODI but failed to chase down 41 runs off 18 deliveries and 20 off the final six. Bangladesh, on the other, bid farewell to Mashrafe Mortaza with a 3-0 clean-sweep win over Zimbabwe. Take a look at the results of the last five T20I match between both these teams. Bangladesh vs Zimbabwe Dream11 Team Prediction for 1st T20I Match.

In a T20I tri-series involving Afghanistan and these two teams, Zimbabwe called right and asked Bangladesh to bat first. The home team, riding on a half-century from Mahmudullah and some vital contributions 30s from the top-order posted 175 on board. Mahmuddullah made 62 off 41 deliveries, which had five maximums and just one boundary. Shafiul Islam then ran through the Zimbabwe middle-order and took three wickets to fold Zimbabwe for 136 and record a 39-run victory.

Bangladesh won the toss and send Zimbabwe to bat and removed their best batsman within the opening seven deliveries. Taijul Islam dismissed Brendan Taylor for just six runs but captain Hamilton Masakadza’s 34 runs, a half-century from Ryan Burl and a run-a-ball innings from Tinotenda Mutombodzi helped Zimbabwe post 144/5 in 20 overs. Bangladesh then chased it down with 14 deliveries and three wickets in hand. Their top-order failed leaving the side stuttering at 4/29 and 6/60 at one stage. But Mosaddek Hossain’s 30 off 24 and Afif Hossain’s fifty powered Bangladesh to the win.

Zimbabwe opted to bat first and Hamilton Masakadza nearly hit a century. His 93 runs from 58 deliveries and a quick-fire 36 from Malcolm Waller helped Zimbabwe reach 180/4 in 20 overs. Neville Madziva then took a four-wicket haul and Tendai Chisoro’s three-fer bundled Bangladesh for 162 runs. Mahmudullah was the only half-centurion for Bangladesh while the rest failed to even reach 25 runs giving Zimbabwe an 18-run victory.

Malcolm Waller’s 49 off 23 deliveries and a 44 from 33 balls powered Zimbabwe to 187/6Shakib Al Hasan’s three-wicket haul was the only good story for Zimbabwe and they were off to a worse start with Imrul Kayes bowled in the first over. But Soumya Sarkar (25) and Sabbir Rahman’s 67-run stand rescued the side. Rahman hit a half-century but the others failed to get going. Nurul Hasan tried late in the innings with a 17-ball 30 runs but Bangladesh failed short by 31 runs.

Soumya Sarkar and Sabbir Rahman scored 43 runs each while Mushfiqur Rahim (24) and Shakib Al-Hasan’s late cameo took Bangladesh to 167. Zimbabwe failed to chase it down and finished on 125/8 with only three batsmen registering double digit-scores. Sabbir Rahman took three wickets with his off-spin and defended that score to win by 42 runs.

Bangladesh have played a total of 94 T20I matches and have won only 30 of them, while also losing 62 games and two ended in ties. Zimbabwe, on the other, played 74 and won 18 while losing 54 matches. They also have two tied matches in overall head-to-head records.

(The above story first appeared on LatestLY on Mar 09, 2020 02:11 PM IST. For more news and updates on politics, world, sports, entertainment and lifestyle, log on to our website latestly.com).