COVID-19 Impact on Grassroot Cricket Will be Felt in October, Says Rahul Dravid 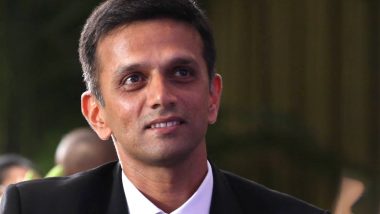 New Delhi, Aug 2: Former India captain and National Cricket Academy (NCA) Director of Cricket Operations Rahul Dravid said the real impact of the Covid-19 pandemic on domestic cricket in the country will start to be felt around October.

Dravid said that even if a vaccine becomes available towards the end of the year, some parts of the domestic season may have to be omitted.

"Hopefully if we're able to find a level of cure or vaccine even towards the end of the year, we'll be in a position to be able to complete, even if not the whole domestic season, but large parts of it," Dravid said in a webinar hosted by Deccan Herald.

"Obviously prioritising that would be important so that young boys and girls don't miss out on cricket for a year. We've been lucky so far (that the pandemic started in March towards the end of BCCI's domestic season), but come October, things might start getting stressful."

Dravid said that October is the time of the year when underage tournaments begin and those might turn out to be casualties of the pandemic.

"A few international tournaments have been cancelled and repositioned, and people can always find time and place for that, but once October comes around, that's when I think it'll start hitting us more," he said.

"The next domestic season, for a lot of our young domestic players -- juniors, Under-16s, Under-19s and women cricketers -- start in October. If we aren't able to get back to a level of normalcy from then -- it could take longer -- we'll see the real impact on our domestic cricket and grassroots cricket. This year is probably more important for someone in his final year of Under-19s, than say for someone who is 23-24."

Dravid also stressed the need for a successful Indian Premier League (IPL) to be hosted this year.

"The fact of the matter is, none of the domestic sport actually generates any revenue. In fact, it costs a lot of money to hold. So if you want to give young boys and girls the opportunity to play, if you want to give them opportunities to express their talent, money has got to come from somewhere.

"The reality is, to conduct tournaments and develop high-class athletes, it costs money; there's a financial element involved.

"It's easy to say we're conducting it (IPL) only because of the huge finances riding on it. I would like to think, without compromising on safety and ensuring all the SOPs are in place to conduct a safe and secure tournament, the money generated from the IPL filters all through our sport and helps fund junior and domestic cricket.

"That is why sporting organisations are keen to conduct these tournaments. They understand if we don't have that revenue, not only will that tournament suffer but the ripple effect will be felt all the way down."

(The above story first appeared on LatestLY on Aug 02, 2020 01:57 PM IST. For more news and updates on politics, world, sports, entertainment and lifestyle, log on to our website latestly.com).