Less than a fortnight after absolving former captain Graeme Smith of racism charges, Cricket South Africa (CSA) on Tuesday gave the clean chit to another former player and current Proteas coach Mark Boucher, saying there is "no basis to sustain any of the disciplinary charges, including charges of racism" against him. 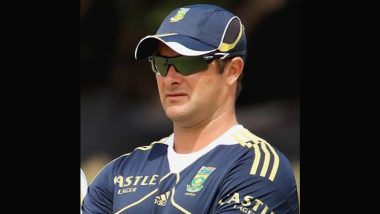 Johannesburg, May 10 : Less than a fortnight after absolving former captain Graeme Smith of racism charges, Cricket South Africa (CSA) on Tuesday gave the clean chit to another former player and current Proteas coach Mark Boucher, saying there is "no basis to sustain any of the disciplinary charges, including charges of racism" against him. The CSA board said that it was 'formally' and 'unreservedly' withdrawing all charges levelled against the former wicketkeeper-batter. Rahul Dravid Refutes Reports of him Attending BJP’s Yuva Morcha Meeting in Himachal Pradesh.

The CSA Board had received a report from the independent Social Justice and Nation-Building (SJN) Ombudsman, Dumisa Ntsebeza in December 2021 which had adverse 'tentative findings' against Boucher. But because the Ombudsman was not in a position to make "definite findings", he recommended that further processes take place to "achieve finality" on the issue. CSA then initiated proceedings as per the SJN Report's recommendations, which gave Boucher a chance to respond to the allegations.

"(Paul) Adams (SA's former left-arm spinner) recently announced that he had withdrawn from testifying against Boucher during the disciplinary hearing. In doing so, Adams stated that his concerns articulated during the SJN process were about the overall 'culture' in the Proteas team during the early 2000s, rather than being about any particular player. Henry Nicholls, New Zealand Batter Faces Injury Scare Ahead of England Tour.

"Nkwe decided that he too did not wish to testify against Boucher. Nkwe stated that he did not intend to take sides regarding Boucher and that "whatever happens in that process, I hope the outcome will be the one that's best for the game". CSA's finally concluded that none of the three charges against Boucher were sustainable.

The recent ruling by Hamilton Maenetje and Michael Bishop in the Graeme Smith arbitration had indicated that the charges against Boucher too would be dismissed. Lawson Naidoo, Chair of the CSA Board, said after the ruling that, "CSA has at all times been committed to dealing with the SJN issues in a manner that treats them with utmost seriousness but also ensures fairness, due process and finality. The decision to withdraw the charges brings about finality on these issues for CSA and Mark (Boucher) and allows the focus to return to the cricket field -- where we trust that Mark and the Proteas will go from strength to strength."

Pholetsi Moseki, the CEO of CSA said, "CSA and Boucher have discussed the way forward and committed themselves to an open dialogue and engagement in order to promote the best interests of South African cricket so as to achieve CSA's strategic goals of access, inclusivity and excellence. We reiterate that Mark Boucher, Paul Adams and Enoch Nkwe all remain valued members of the CSA coaching fraternity."

(The above story first appeared on LatestLY on May 10, 2022 04:03 PM IST. For more news and updates on politics, world, sports, entertainment and lifestyle, log on to our website latestly.com).