In a battle between master and protege, it was the veteran who stood tall at the end of the day as his side pulled off a complete performance to keep alive their playoff hopes. Delhi Capitals on the other hand, would be keen on doing well in their remaining games and returning back to form as soon as possible. 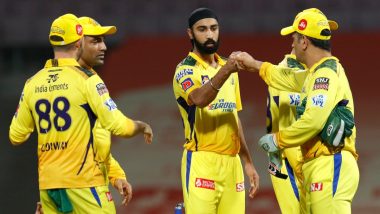 Chennai Super Kings managed to keep alive their slim hopes of a playoff spot with a massive 91-run victory over Delhi Capitals at the DY Patil Stadium in Navi Mumbai on Sunday, May 8. It was a very clinical performance on all fronts by the defending champions, who romped back to winning ways on the back of some wonderful batting and good bowling. Batting first, it was Devon Conway's 87 that set up CSK's massive total of 208/6. He once again formed a solid opening partnership with Ruturaj Gaikwad (41). The duo took CSK to 110 in just 11.5 overs. After Gaikwad's dismissal, the good work was continued by Shivam Dube, who came in at three. IPL 2022 Points Table Updated With NRR

The left-hander, who replaced an injured Ravindra Jadeja in playing XI, slammed 32 runs off 19 deliveries with two fours and as many sixes. MS Dhoni then provided the finishing touch with 21 runs off just eight deliveries to help CSK finish on a high. With the ball in hand, they got wickets upfront. David Warner was supposed to one of the main threats to CSK. But the Australian's dismissal in the fifth over landed a huge blow to Delhi's chase. Skipper Rishabh Pant inspired confidence with 21 runs off 11 deliveries but with him and Ripal Patel falling in the same over to Moeen Ali almost decided the outcome of the game. From then on, wickets continued to tumble as usual and eventually, it was a matter of time before CSK got the two points. And Dwayne Bravo finished things off quickly in the 18th over with wickets off two consecutive deliveries.

CSK would now aim to keep up their final push for a playoff spot when they face Mumbai Indians on May 12. Delhi Capitals on the other hand, will be keen on regrouping against an in-form Rajasthan Royals side on May 11.

(The above story first appeared on LatestLY on May 09, 2022 12:14 AM IST. For more news and updates on politics, world, sports, entertainment and lifestyle, log on to our website latestly.com).