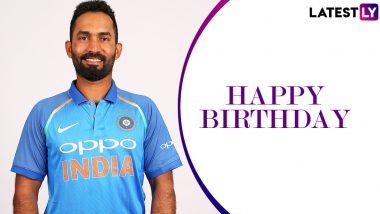 Kolkata Knight Riders skipper Dinesh Karthik has been a prolific cricketer in India’s domestic cricket scene despite never enjoying a continued outing with the senior national team. The Tamil Nadu batsman made his debut for India back in 2004 but with Mahendra Singh Dhoni as his competitor, making a spot in the playing eleven has been next to impossible. Still, the talent of the man with both bat and behind the wickets sees him get chance in several ICC tournaments and important tours. It is as if he is always around for a call which is a testimony for the kind of performances he has in the domestic circuit. Dinesh Karthik Wants IPL to Happen So That He Can Work With McCullum and Eoin Morgan.

As Dinesh Karthik turns 35, we take a look at some interesting facts about him.

A utility player, Dinesh Karthik is a go to man for the Indian cricket team for a variety of roles and has even represented India sans his wicketkeeping gloves.

(The above story first appeared on LatestLY on Jun 01, 2020 07:40 AM IST. For more news and updates on politics, world, sports, entertainment and lifestyle, log on to our website latestly.com).