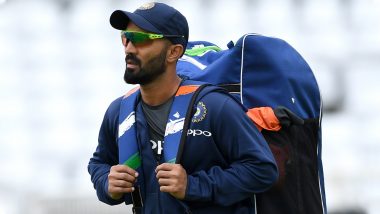 New Delhi, May 5: In the latest episode of ESPNcricinfo One on One #Workfromhome, Dinesh Karthik spoke about his cricketing career, his experience at the 2019 WC, his role as a captain at KKR, his coach Brendon McCullum and teammate Eoin Morgan, the two promising talents -- Shubman Gill and Kuldeep Yadav -- and how he sees them shaping up at Kolkata Knight Riders.

"KKR is without doubt the best franchise I have played for and I feel honoured to lead this team. In my the first year at KKR, we did very well, we almost made it to the final but lost in semis. It was a great season, we had a lot of young guys and we did our best to push forward the result. I need to do something special and help them cross the line," he said. IPL 2020: Dinesh Karthik Will Remain KKR Captain, Confirms Brendon McCullum.

Commenting on the format of IPL and his role as captain, Karthik said: "It is a very interesting time for cricket. The amount of data that has been consumed to play every game in last few years is phenomenal. And since the entry of corporates it has changed so much. They want us to embrace analytics as well as the technical knowhow of the game. We use a lot of tactic at IPL, not only during the game but also during the auctions. There is a lot of knowledge floating around, and how you use this knowledge to get your opponent is in the hands of the captain, the coach and senior players."

Karthik feels that the role of coach is important in a tournament like IPL. "A coach can do more in IPL. He can get into the tactical part of the game and help the leaders to formulate the plan," he said.

Sharing his reason why he wants the IPL to happen this year, Karthik said: "In every generation there is a cricketer who changes the face of cricket. I think Brendon McCullum did that in the last WC. He showed the world how to play the game really fair, really hard in a watchable and enjoyable manner. He is extremely inspiring. One of the reasons why I want this IPL to happen is to be able to work with Brendon and Eoin Morgan. These are the two people I genuinely want to rub shoulders with. I can learn so much from these two people."

Brendon McCullum is currently the coach of KKR but Karthik and Brendon have played together in past at Gujrat Lions. Commenting on what translates in to success at IPL, Karthik said: "It is a very corporate atmosphere at IPL. You either persevere or perish. The teams that are successful tend to keep it consistent because they know the formula and keep trusting the process in the hope that it will gives results. Then there are teams that are yet to succeed. They want to try and achieve what they feel is good enough for that team and in the process they keep experimenting with the methodology."

On young talent Shubman Gill, Karthik said: "He is a special talent. He managed to showcase his skills in the limited opportunity that he got opening the batting." On how he thinks he can support such talent, the captain said: "As a franchise we should give him complete freedom and let him express himself on field and let him enjoy his time there. It's a beautiful journey. He has the potential for being with us for many years."

(The above story first appeared on LatestLY on May 05, 2020 10:44 PM IST. For more news and updates on politics, world, sports, entertainment and lifestyle, log on to our website latestly.com).