England vs Ireland 3rd ODI 2020: Sam Billings, Curtis Campher and Other Key Players to Watch Out in Southampton 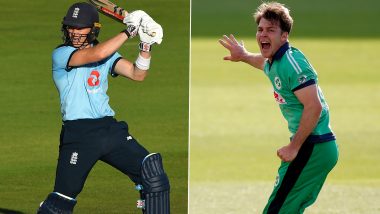 England will eye a clean-sweep when they host Ireland in the third and final ODI of a three-match series at Southampton on Tuesday. Eoin Morgan’s side have already clinched the series after two comprehensive wins and head into the final match looking to maintain a perfect record against their noisy neighbours. Ireland will search for a consolation win having come close to upsetting England in the first two ODI matches. A win in the third ODI will be Ireland’s first win against England since heir feat at the 2011 World Cup. England have already taken an unassailable 2-0 lead in the series. England vs Ireland Dream11 Team Prediction: Tips to Pick Best All-Rounders, Batsmen, Bowlers & Wicket-Keepers for ENG vs IRE 3rd ODI 2020.

Sam Billings was the lynchpin to both England wins in the opening two ODI matches and bailed the side out after a top-order collapse. On both occasions, he found an able partner in a left-hander. Captain Morgan hit the winning runs in the first game with Billings on the other end while Billings also watched David Willey struck a six to seal the series. England won the first match by six wickets and followed it a four-wicket win to complete a series win. As both sides face each other in the third and final ODI match, take a look at some key players for the clash.

The 29-year-old bailed England out in the first two matches and played two crucial innings to seal the series for his side. With scores of 67 and 46 after coming in at 59-3 and 98-3, Billings has already shown he can be handy middle-order batsman. He is England’s highest run-scorer in this series and will once again be key as the home side chase a white-wash.

Campher has been a revelation for Ireland and one of their bright spark in an otherwise disappointing series. The 21-year-old, making his debut in this series, became the first Ireland cricketer to score consecutive half-centuries in his first two ODI innings. Even as the batsman around him have struggled against a second-string England bowling attack, Campher has shown real quality and helped his side to a respectable score in both the matches. He also worked his magic with the ball in the second match and nearly pulled off a miraculous win.

After managing just two off seven deliveries in the first ODI, Bairstow showed Ireland the damage he could do when on song. The 30-year-old opening batsman smacked his way to a joint-fastest ODI fifty for England and also completed 3000 ODI runs in the second match. His blistering innings of 82 from only 41 deliveries was key to England surviving a collapse and get home a comfortable win. Bairstow has also been safe with the gloves behind the stumps.

Willey is the highest wicket-taker in this three-match series. With the series already sealed, the 30-year-old might be given some rest as he played both the opening two games. Left out of the 2019 World Cup squad despite being a regular member of the team for four years, Willey’s international career was thought to be over.

But he fought back with a five-wicket haul in his first appearance since being recalled. Willey also started Ireland’s collapse in the second ODI. Captain Morgan will certainly look to his most experienced bowler to provide them with a good start in third ODI match.

(The above story first appeared on LatestLY on Aug 03, 2020 04:33 PM IST. For more news and updates on politics, world, sports, entertainment and lifestyle, log on to our website latestly.com).