The T20I series between India and England signifies the end of the tour for Mithai Raj and co. They drew the Test match, lost the ODI series 2-1 but on home turf, they would find beating England a tough job. 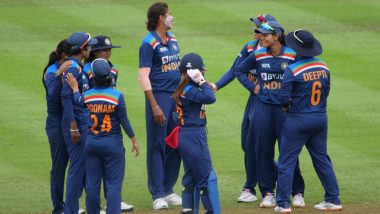 Indian women would take on their English counterparts in the first of the three-match T20I series on Friday, July 09. The match would be played in Northampton and would start at 11:00 PM IST (Indian Standard Time). This series marks the last leg of Indian women's cricket team's tour of England. They played bravely to draw the only Test, but were beaten comprehensively in the first two ODIs. Mithali Raj's team however found form and ended the ODI series with a consolation win, The return to form might have just come at the right moment for the Indian side, who would be looking at making a statement and ending the tour of England on a high. Latest ICC Rankings: Mithali Raj Reclaims Top Spot in ODI Women's Player Rankings for Batting

The English side however would have the advantage of winning three of the last four times they have faced India. Playing in home conditions in any day, ad added advantage. The last time they faced each other, England won by four wickets.

The first T20I match between England women and Indian women would be held on July 09, 2021. The match would be played at The County Ground and would begin at 11:00 PM IST S(Indian Standard Time). This is the first of the three-match series.

Fans in India can watch the live telecast of England women vs India women, 1st T20I Match 2021 clash on Sony Sports channels. Sony Pictures Sports Network is the official broadcasters of the India Women vs England Women One-off Test match in India. So fans need to tune into Sony Ten 1 SD/HD channels to watch the match live on their television sets.

(The above story first appeared on LatestLY on Jul 09, 2021 06:30 PM IST. For more news and updates on politics, world, sports, entertainment and lifestyle, log on to our website latestly.com).