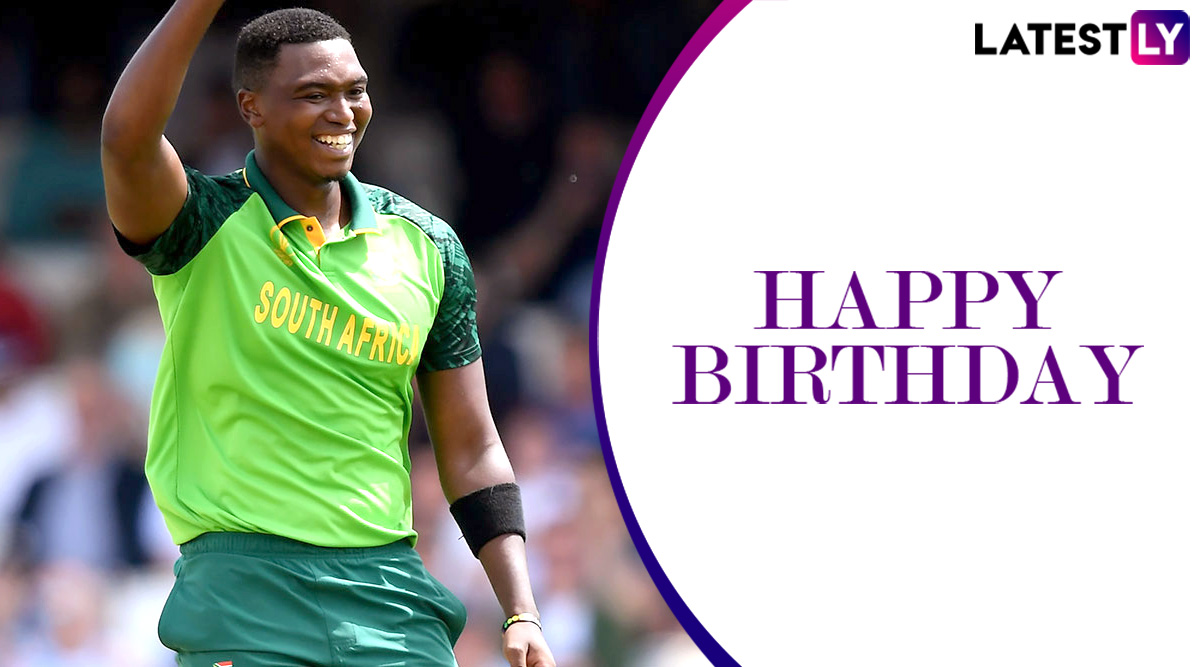 South Africa's rising pace sensation Lungi Ngidi celebrates his 24th birthday on Sunday (March 29, 2020). The right-arm pacer possesses the ability to set the speed gun on fire and has bowled many match-defining spells in his short but impressive career. Be it taking wickets with the new ball or choking the run-flow in the end overs, Ngidi has ticked all the boxes and is tipped to become one of the greats of the game. Below, we'll look at some of his best bowling performances. Lungi Ngidi Becomes Fastest South African Bowler to Reach 50 ODI Wickets.

Ngidi made his international debut back in January 2017 and didn't take long in leaving a mark. He was named Man of the series in his first T20I series against Sri Lanka and kick-started his career. He didn't take long in securing a place in the all three formats and did well in the opportunities he got. However, Injuries have been coming in Ngidi's way amid which, the right-arm pacer has missed many series and tournaments. However, he has been in sensational form in recent times. The speedster, instead, became the fastest South African bowler to reach 50 ODI wickets. Meanwhile, let's look at Ngidi's best bowling performance.

4/19 Against Sri Lanka in Johannesburg

South Africa vs Sri Lanka 2nd T20I 2017 was Ngidi's only second T20I match in which breathed fire. Defending a below-par total of 113 runs, the right-arm pacer ran through Lanka's top order and brought South Africa back in the match. He dismissed the top four batsmen of the visitors. However, the other Proteas bowlers weren't able to leave a great mark as Sri Lanka won the match by three wickets.

6/39 Against India in Centurion

Ngidi's maiden Test appearance came during the 2nd Test of India's 2018 Tour of South Africa. He replaced the legendary Dale Steyn in the match but didn't make his absence felt. The pacer delivered an impressive spell in India's first innings. However, his best came out in the last innings of the encounter. The youngster made an impeccable use of the Centurion track and scalped six wickets in total. Riding on his brilliant performance, the home side won the game by 135 runs.

6/58 Against Australia in Bloemfontein

Another Lungi Ngidi Special was witnessed during the 2nd ODI of Australia's 2020 Tour of South Africa. Bowling first against the mighty Australian batting line-up, the speedster breathed fire and scalped six wickets, his best performance in ODIs. Courtesy his stellar efforts, the Men in Yellow were bundled out for 271 runs and later, lost the game by six wickets.

4/10 Against Kings XI Punjab in Pune

Amid the pacer's brilliant performances in the international circuit, Chennai Super Kings (CSK) picked him for INR 50 Lakh during 2018 IPL lakh which proved to be an absolute steal. His best performance in the tournament came against Kings XI Punjab. In the first innings of the match, Ngidi used the new ball to perfection and dismissed in-form openers KL Rahul and Chris Gayle for low scores. He came back in the death and scalped two more wickets. As a result, KXIP were packed for 153 runs and subsequently, lost the game by five wickets.

The star pacer's next assignment was supposed to get underway with the start of IPL 2020. However, the tournament has been postponed amid the coronavirus scare and speculations are that the gala tournament might well get called off. With the ICC T20 World Cup 2020 scheduled to be played later this year, South Africa's success will be critical on Ngidi's performance.